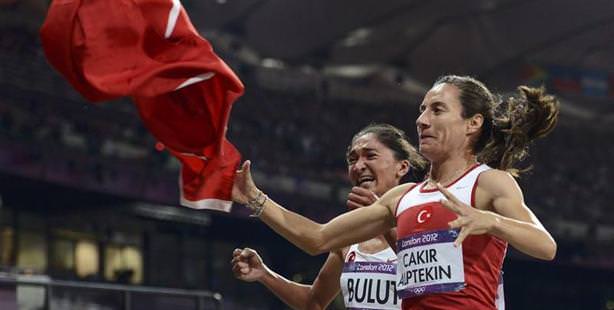 Aslı Çakır Alptekin led a Turkish 1-2 when she held off Gamze Bulut to win the women's Olympic 1,500 meters gold on Friday after delivering a powerful final lap in a tactical, bunched race.

Alptekin won the European title in Helsinki two months ago, with Bulut coming in right behind her.


Turkey's contenders did a repeat as Alptekin looked powerful and strong on Friday, coming home in four minutes, 10.23 with Bulut second in 4:10.40.

Maryam Yusuf Jamal of Bahrain was third and American Morgan Uceny, who fell in the 2011 world championship final, tumbled again on Friday and beat the track in tearful frustration.

This is the second gold and fourth medal won overall for Turkey in the 2012 London Olympics.
Tonight's duo win was also a historical first for Turkey as Alptekin's gold is Turkey's first-ever in athleticism.