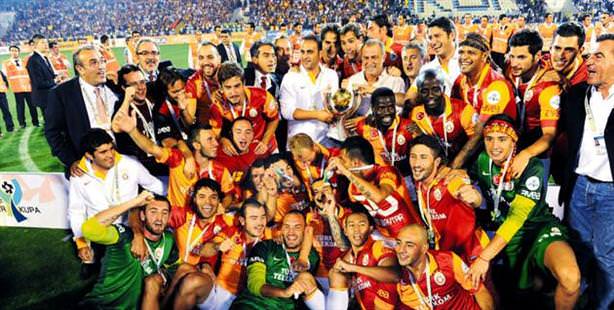 The Super Cup final was played in the new Erzurum Stadium and overseen by FIFA referee Cüneyt Çakır, who was joined by assistant referees Bahattin Duran and Tarık Ongun, with Süleyman Abay on as the fourth ref.


Galatasaray came on strong at the start with a series of goal attempts that turned into misses. Also early on, Fenerbahçe goal keeper Volkan Demirel suffered a shoulder injury and had to be wheeled off in a stretcher and was taken directly to the hospital. Young substitute Mert Gürok made an unfortunate mistake and a long shot from Umut Bulut scored Galatasaray's first goal. Suddenly the stadium and field were filled with flares thrown by Galatasaray's supporters. The entire playing field filled with smoke and soon after it cleared, Fenerbahçe responded with a repeated free kick Captain Alex De Souza used to his advantage and then it was their fans' turns to throw flares into the field. Seven minutes of additional time had to be added to the end of the first half due to the chaos.

The second half was marred by controversial referee decisions and an enraged Engin Baytar who was sent out of the game, leaving Galatasaray down to just ten players. Umut Bulut scored again for Galatasaray and new Fenerbahçe transfer Dirk Kuyt responded bringing the score to 2-2. While it appeared the victory may be determined by overtime, a penalty kick given to Galatasaray's Selçuk İnan in the 88th minute, brought the score up to 3-2 and determined the victor. There was one final nail-biting attempt by Mehmet Topuz, whose strike hi t the goal post and then the game was called.

Last night's match results bring Galatasaray and Fenerbahçe on an even level as previously
Fenerbahçe had played in the TFF Super Cup final twice and won both games, while Galatasaray had only taken one cup home after also trying their hand in the final two times.