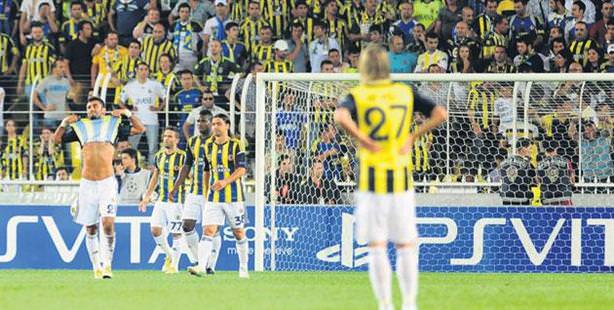 After losing to Spartak Moscow by 2-1 in the first leg in Russia, last night’s 1-1draw was not enough to push Fenerbahçe through.

Fenerbahçe will now go on to contend in the UEFA Europa League and tomorrow's drawing will determine which group they will compete in.

With last night's 1-1 draw, Spartak Moscow progresses on into the UEFA Champions League group stages. Spartak had the advantage last night coming in after a 2-1 lead. Their first attack turned into the first goal of the game, and in just the sixth minute Fenerbahçe was down by one.

Captain Alex came in for the second half, and after two attampts hitting the goalpost,in the 69th minute, the hosts scored. A corner shot from Alex was secured by Mehmet Topuz and Moussa Sow went ahead and scored.

Suddenly Spartak was stuck on their side of the field and committed to making fouls which resulted in Demy De Zeeuw's red card with just ten minutes remaining. In addition, Spartak's Evgeny Makeev had to play with an injured knee because the Spartak coach had used all of his substitutions. The remainder of the game was marked by injuries and players on the ground from Spartak with Fenerbahçe trying frantically for a final score. In the end the 1-1 draw last night worked in Spartak's favor as with the 3-2 aggregate, the team joins their fellow Russian Zenit in the Champions League.
The drawing for the Champions' League group will be held later today.

According to Spartak Moscow's Technical Director Emery, it was their positive energy that allowed them to qualify for the Champion's League. Emery also complained about the quality of the field and stated, "It was a very aggressive and warrior battle. My players were exhausted because of the field."

The last time Fenerbahçe played in the Champions League was in the 2008-2009 season.

For Fenerbahçe to make it past this round would have brought a sense of esteem for the fans. After last year's absence from European competitions due to a disqualification call by the Turkish Football Federation who was pressured by UEFA, Fenerbahçe would have done well to go as far as they could, which would have brought about a whole additional sense of satisfaction. It would alsohave been the first time in three years that Fenerbahçe will have qualified for the Champions League.

As for technical director Aykut Kocaman, to qualify would mark the first time as both a football player and coach that Kocaman would be contending in this arena. Aykut Kocaman was sent-off from Fenerbahçe after the 1995-1996 championship. In the 2010-2011 season, he returned to the team as technical director. That year, Fenerbahçe was eliminated by Young Boys and the following year the team was disqualified. Kocaman has also yet to see a win in Kadıköy after three European league matches.

In addition to UEFA's per match payouts, there is also the market pool that will go to the team. The market pool consists of proceeds from television and commercial coverage of the Champions' League, which is later redistributed amongst teams based on the size of each domestic broadcasting contract. Out of last season's combined 341million euro market pool, Trabzonspor was paid out 12,858 euros. This year, the market pool is up by 20 percent which means Turkey's share will also increase to 15,460 million euros. With Fenerbahçe not making it to the group stage, this money will go to last season's Super League champions Galatasaray.