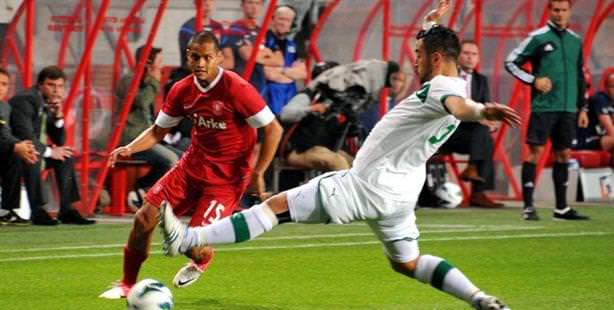 Although Bursaspor went into last night's second leg against the Dutch FC Twente with a 3-1 advantage, Coach Ertuğrul Sağlam's Bursaspor lost in overtime by 4-1 at the 30,205 capacity De Grolsch Veste Stadium.

Bursaspor practically handed the game over last night with a red card for Basser and defense errors in two of the four goals their rival's scores. In just the 26th minute an arm intervention in the penalty field by Ömer Erdoğan granted Twente a penalty shot, which Fer scored, bringing the Dutch team up by 1-0. Bursaspor recovered in the final minutes of the first half with a goal by Pinto from the penalty line. In the 61st minute Twente came back into the lead with a goal by Schilder in the 61st minute. As Bursaspor was still trying to recover from having fallen behind, less than a minute later low and behold Twente scored their third goal with Gutierrez, bringing the score up to 3-1. In the 89th minute, Basser was thrown out of the game after receiving a second yellow card and the game's normal time came to a close. Twente's 3-1 lead evened out the aggregates therefore the game went into overtime. In the 116th minute it was Fer who scored the goal that would put an end to Bursaspor's Europe adventure, giving Twente the 4-1 victory and the 5-4 aggregate.

As for Trabzonspor, with two 0-0 draws, the game was determined by penalties, which the Hungarian team won with a perfect four out of four penalties scored.

Şenol Güneş's Trabzonspor and Hungary's Videoton managed to play for a whopping 210 minutes without scoring a single goal. The first leg finished 0-0 in Trabzon, while last night's return leg played in the Sostoi Stadium also ended in regular time with a goalless draw. With overtime, the 120-minute game went to penalty shoot-outs. When Trabzonspor's Soner and Zokora missed, the Hungarian team were the ones to go through having scored all four of their penalty shots bringing the aggregate to 4-2.

With Bursaspor and Trabzonspor's elimination, Fenerbahçe will be Turkey's sole contender for the Europa League. Fenerbahçe will be joining in on the group stage round after an early departure from the Champions League. The group stage consists of 12 groups with four teams each. The top two teams to make it out of each group in this round advance to the next stage. The group stage kicks-off on September 20th and comes to a close on December 6th, with each team playing a total six games. The Europa League final will be played on May 15th, 2013 in Amsterdam.