The goal to become world champion in bikini fitness 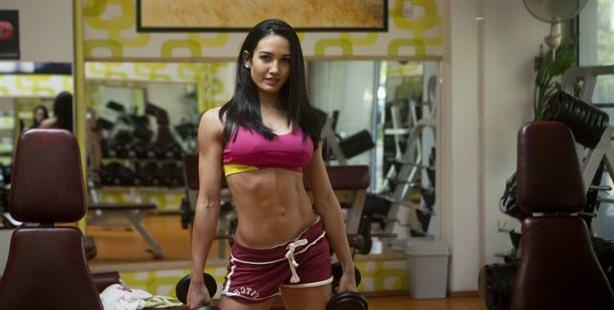 Turkey's 19-year-old contender Simay Öztürk in Bikini Fitness, a new sports branch reminiscent of bodybuilding, who recently placed in Yeditepe University's Gastronomy Culinary Arts Department, has been an athlete since she was nine. She swam for ten years, and then moved on to working out at a gym in Suadiye. Her trainer Kaya Aslantepe introduced her to the sport of 'Bikini Fitness', which is fast becoming globally competitive to body building yet is more desirable for female athletes.

At a height of one meter, 68 centimeters and weighing 59 kilos, Simay Öztürk began shaping her body to become competitive. She is now known for her six pack abs and well-built arms. Öztürk first placed in the Turkey Wellness Championship. She then went on to win a bronze in the European Junior Women's Bikini Fitness Championship. Although her ultimate goal is to go on to compete in the world championships, she is currently preparing for the upcoming September 13-14 Turkey Bikini Fitness Championship which will be held at Maslak Life GYM.

When asked how the jury judges the competition, Öztürk explained, "The competitor's diet, the proportion of their body, the appearance and shape of their muscles are all evaluated based on points. They also measure fat and muscle. The lower the amount of fat, the more points we are given. There are also points for beauty and likeability."

Simay Öztürk suggests women partake in the sport she is so fond of, and says, "You do not need to build muscles as extremely as in bodybuilding. You only need enough muscles to look fit. In other words, your muscles need to fit your body. Also, the sport I do is one that goes against obesity. There are people abroad who consider this sport to be more of a lifestyle," says Öztürk.