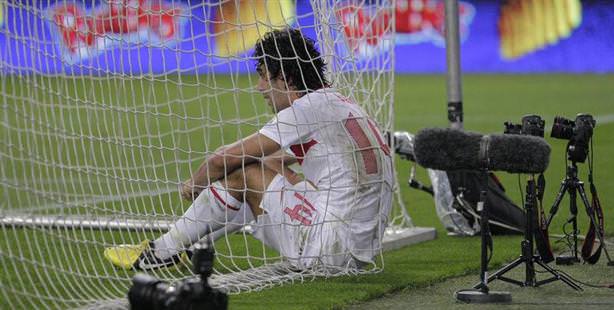 Turkey has returned home empty handed due to goals scored by Holland’s Van Perise and Narsingh in the first game for the World Cup Group D qualifier played last night in the Netherlands.

Turkey will now be setting its sites on Tuesday night's game in Kadıköy against Estonia.

Technical Director Abdullah Avcı's surprising player selection was highly debated prior to the game for including Tunay in the line-up, playing Hamit Altıntop in the right back position. Also the fact that Selçuk İnan wasn't included in the starting line-up was a shock to all sports lovers alike.

Van Persie put the Dutch in front after 17 minutes and Narsingh broke through on the counter attack in stoppage time to seal an 11th successive World Cup qualifying win for the hosts.

Despite the Turks enjoying the better of the opening exchanges backed by about 20,000 fans, almost half of the 50,000 capacity stadium, the Dutch opened the scoring when Van Persie met a Wesley Sneijder corner. The goal boosted the home side's confidence but their careless defending continued when Willems lost the ball to Arda Turan, only for the midfielder to shoot wide. Arda Turan was definitely one of the strongest players in the game, however he missed what should have been a clear goa, when just seven minutes following Van Persie's goal, he stole the ball from under Willem's foot and came face to face against goalkeeper Krul. It would have been harder to miss than to score from that point, but the Atletico Madrid player missed indeed, sending any hopes of an early draw wayside.

Just before the break Netherlands keeper Tim Krul hesitated and almost let in Umut Bulut whose header hit the bar. Turkey began to run out of ideas and energy in the second half, allowing the Dutch to regroup and take the game to the visitors. Van Persie and Arjen Robben had decent chances before Narsingh wrapped up the 2-0 victory for the Dutch.

If we are in the finals, Holland is not!

Turkey has only ever played in the World Cup, which runs every four years, in 1954 and 2002. The funny thing is these are the two finals that Holland didn't place in. The interesting coincidence continues in the fact that both nations were paired to face each other in the qualifying group stage for the 2014 World Cup. The top team to come out of the group stage is guaranteed a spot in Brazil, while the teams that come in second will move on to a play-off. Meanwhile, Holland has lost the past four games played. The last time Holland lost five games in a row was 62 years ago.

1950
We didn't make, it, we had no money!
In 1950, Turkey played a single elimination game against Syria at the Ankara May 19 Stadium and won by 7-0. However, due to the trying economic times following the Second World War, Turkey just wasn't able to compete in a tournament being held in Brazil.

1954
Down to a drawing, Franco sends us through
Turkey's National Team participated in the 1954 World Cup held in Switzerland for the first time ever. Turkey lost to Spain by 4-1 in the elimination round yet went on to win the return leg by 1-0. The two played a final game together in Rome, on an impartial field, and the match ended in a 2-2 draw. According to the regulations at the time, this tie was determined by a drawing conducted by an Italian boy named Franco who was called in from the tribunes. As a result of Franco's drawing, Turkey went on to the finals. Turkey lost their first game against Germany by 4-1, however then went on to beat South Korea by 7-0 which put them up against Germany again which they lost to by 7-2, thereby saying goodbye to the cup.

2002
A golden and early goals surprised…
Turkey came out second in their group for the World Cup played in South Korea and Japan, which would mark the first time they made it to the semifinals. After losing 1-0 to Brazil and then beating South Korea by 3-2, the National Team went on to place third in the World Cup, with İlhan Mansız's golden goal against Senegal and Hakan Şükür's score against South Korea going down in history as the fastest goal ever scored.

2014
A race for 31 tickets
The 2014 World Cup returns to South America for the first time in 36 years since played in Argentina. Hosts Brazil qualifies directly while 207 nations compete for one of the 31 tickets to play in the finals. With 13 finalists, the European continent has the lion's share of qualifiers allotted.