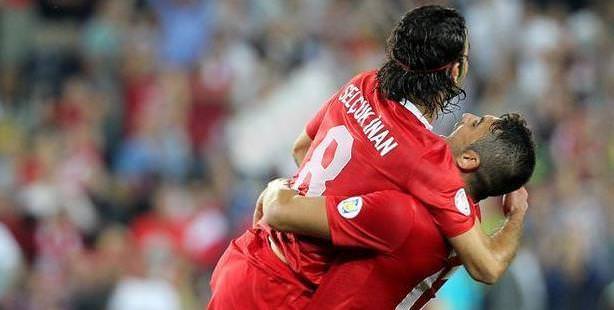 Turkey cruised to a 3-0 victory off in Istanbul’s Şükrü Saracoğlu Stadium over a predominantly ten player Estonia in their World Cup qualifier on Tuesday, securing their first points in Group D after an opening defeat by Netherlands.

Estonia defender Enar Jaager was sent off for a 19th-minute foul on Burak Yilmaz but the hosts could not capitalize until a minute before halftime when captain Emre Belözoğlu scored from Arda Turan's pass in the 44th minute.

Turkey, beaten 2-0 by the Dutch in Amsterdam on Friday, increased the pressure in the second half, creating several early chances.

Striker Umut Bulut headed home at the near post on the hour from Sercan Sararer's left-wing cross in the 60th minute.

Substitute Selçuk İnan added a third goal in the 75th minute, just seven minutes after he was broguth into the game.

From Turkey's Group D rivals, Hungary lost 1-4 to Netherlands, while Romania beat Andorra 4-0. Turkey and the remaining Group D contenders next play on October 12th, when Turkey will face off against Romania, Estonia will play Hungary and Netherlands plays against Andorra.

Turkey sought a victory after losing 2-0 to Holland in their first away game. Estonia also lost their first World Cup qualifier by 2-0 on home ground against Romania. Last night, the other Group D contenders also played with Romania facing offagainst Andorra and Hungary against Holland. The point standing following the first qualifiers has Hungary at the top with three points and five goals, followed by Romania and Holland with two goals each as well as three points. Turkey, Estonia and Andorra all follow with zero points.

Estonia is strong in away games as proven by their performance in the Euro 2012 eliminations which they walked away from with three away game wins and one draw out of a total six games played. They went on to finish the group stage in second place with 16 points.

Last night's game will be refereed by Polish Football Federation referee Marcin Borski, with Rafal Rostkowski and Tomasz Listkiewicz as his assistants. Pawel Gil will serve as fourth referee.

Speaking at a press conference held at the Swiss Hotel, Technical Director Abdullah Avcı explained that he will be implementing a closed game tactic. Avcı's player selection was highly criticized in the game against Holland, however tonight the coach is expected to finally play Selçuk İnan, whether it be in the starting line-up or as a substitute later on. Another player whose absence in the Holland match was highly debated Gökhan Gönül will also be taking his spot in the Estonia game. Tunay's position in the right wing in the Holland game will be given to Hamit Altıntop.

When asked why he chose the line-up he did in Turkey's first group qualifier, Avcı stated, "Holland didn't play Huntelaar, the goal king of the German league. They also didn't play Kuyt, Turkey's most valuable foreign player. Well, Selçuk is our most valuable player. He will be played when the time comes."