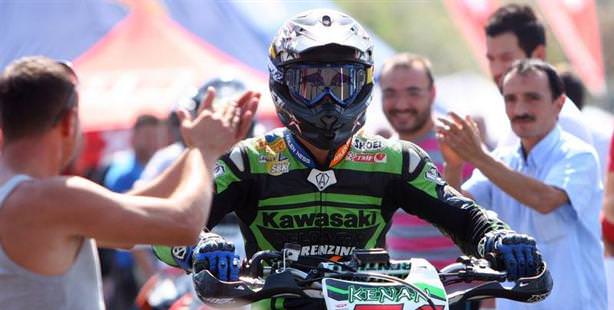 National motorcyclist Kenan Sofuoğlu has become the champion of the 2012 Supersport World Championship.

National rider Kenan Sofuoğlu claimed the 12-leg Supersport World Championship on Sunday by coming in second for the Portuguese circuit, with a race still to go.

Kenan Sofuoğlu started off the Portuguese leg in seventh place, yet managed to complete the race in second. The results bring Sofuoğlu's points up to 218. By maintaining a 33-point difference with his closest rival France's Jules Cluzel, the Turkish rider has managed to guarantee his win of the 2012 Supersport World Championship title.

This will be the national rider's third world championship title after winning both the 2007 and 2010 championships.

After the race, Sofuoğlu who is on the Kawasaki Lorenzini team donned the 'number 1' uniform and gold-tipped boots to do a length around the track waving a Turkish flag. France's Jules Cluzel came in first in the Portuguese race, with Fabian Foret, also from France, coming in third. The second place win brought Sofuoğlu 's overall ranking to 218 points, followed by Jules Cluzel with 185 points and Fabian Foret with 160 points in third. The final race of the season will be held in France's Magny Cours circuit on October 7th.

Despite a series of difficult challenges, the unstoppable rise of national motorcyclist Kenan Sofuoğlu continues. This season alone, Sofuoğlu has been disqualified, had first place taken from him, a plate put into his knee and suffered the death of his grandmother. However, it seems Sofuoğlu has defied fate by bringing home his third world championship title.

Sofuoğlu's ill fate is not limited to this season however, as throughout his 28 years; the rider has faced a number of difficult challenges. Sofuoğlu was first introduced to motorcycles when he was just a young child by his father who worked as a mechanic.

Sofuoğlu and his brothers Bahattin and Sinan grew up with a passion for motorcycles. However, this two wheeled- apparatus had become a part of him and Kenan was unable to give up riding even after losing his brother to a motorcycle accident.

In the 1999 Gölcük earthquake, Sofuoğlu and his family made it out of their apartment alive, even though the building did not survive the quake.

This would not be the only bad news for the family however, because in 2002 Kenan lost his older brother Bahattin in a car crash and in 2008 he lost his brother Sinan to a motorcycle accident. After his brothers' death, Kenan's parents were extremely against his continuing to ride.

Sofuoğlu continued however, only to suffer misfortune after misfortune. This year alone, in March Sofuoğlu suffered an accident necessitating a plate being put in his knee. He was also disqualified in the second race in Italy for taking a turn that went off the track. Sofuoğlu returned from Italy only to lose his grandmother. This death which came just a year after losing his father rocked Sofuoğlu deeply.

In July, Sofuoğlu received a four place penalty for head-butting Fabien Foret in the Spanish Motorland Aragon Circuit which although he had come in first placed him in fifth.

Despite all of the hardships and 'difficult turns' in his life, Sofuoğlu has managed to secure the championship title with one race still remaining. This year's title marks the third for Sofuoğlu, who won the championship in both 2007 and 2010.