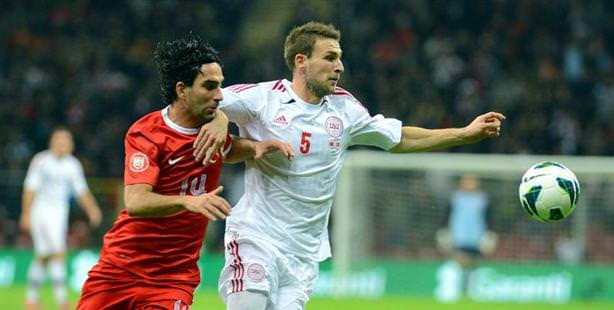 Turkey hosted Denmark for a 1-1 draw in yesterday’s night of friendlies which closed the international year in Europe.

Singer and former Turkish Eurovision contender Hadise kicked off the game with a small preshow concert in the TT Arena to celebrate the Turkish National Team's 500th game.

The Vikings took the lead last night with a penalty shot by Nicklas Bendtner however the A National team recovered with a goal by Mevlüt Erdinç for what would become the first draw for Abdullah Avcı in the past 12 games under his coaching.

THE GOALS OF THE GAME

Entering the game at the start of the second half, Selçuk İnan attempted to intercept the ball from Krohn Dehli in the penalty field in the 64th minute which resulted in a penalty call. In the 65th minute Bendtner turned the shot into a goal and visiting Denmark took a 1-0 lead. Shortly after, in the 69th minute, Mevlüt found himself inside the penalty field with a ball from Kerim Frei. Mevlüt straightened out the ball and shot an unexpected goal into the goalpost, which brought the score up to a 1-1 draw.

Technical Director Abdullah Avcı, known for giving younger and less experienced players a chance on the team, played Kerim Frei for his first time ever on the national time. Frei was instrumental in setting up the shot that became Turkey's sole goal.

Wednesday night's friendlies were this year's final tests before the World Cup campaigns resume in March.