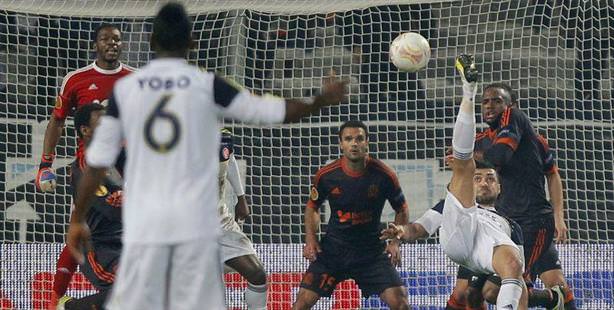 After 27 years of failing to secure a victory in France; Bekir İrtegün’s spectacular goal not only brought down by 1-0 Marseille at home, but it also secured the Turkish representatives a spot in the UEFA Europa League knockout round.

Fenerbahçe secured their point superiority last night in Group C guaranteeing their spot as group leaders after collecting a total 13 points from five games played, including a clear nine points from three away games.

THREE LEFT TO A RECORD

Fenerbahçe, already the holders of the title of the Turkish team to have garnered the highest points in their group in a European cup, has now given themselves the chance to break that record in the December 6th game at home against Mönchengladbach. During the 2009-2010 season, Fenerbahçe completed the group stage round in the Europa league as leaders with 15 points, which was also a record at the time. If Fenerbahçe beats the German team at the Şükrü Saracoğlu Stadium, they will have raised their point standings up to 16, thereby breaking the record they set themselves.

I SCORED IN MY MIND FIRST

Having scored his second goal in Europe this season, following the game Bekir stated, "I am very pleased to have scored the goal I did. This win was very important for us. Explaining the position, Bekir said, "We were all ready and waiting by the time Gökhan got the ball. We had worked on this position. As the ball arrived I had already made my mind up. I envisioned the score in my head and then went ahead and shot. This has become one of the best goals I have ever scored."

THE GOAL OF THE GAME

In the 40th minute, Cristian Baroni used a corner shot from the left which made its way to Gökhan Gönül who shot a header bringing the ball into the penalty field. Bekir, whose back was to the goal post, straightened the ball with his chest before scoring the goal with a bicycle kick.