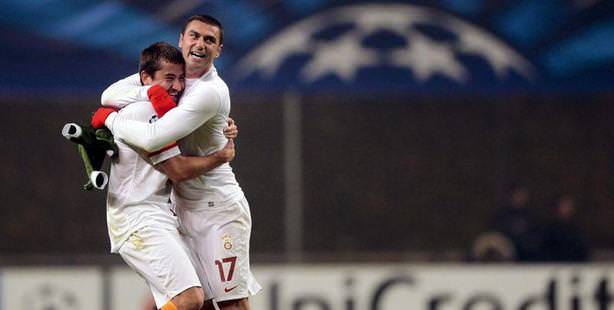 Second-half goals from Galatasaray's in-form striker Burak Yılmaz and substitute Aydın Yılmaz sealed a memorable 2-1 comeback win at Braga on Wednesday that sent the Turkish champions into the Champions League knockout phase for the first time in a decade.

Galatasaray were second in Group H before the match, with the same points as CFR Cluj but ahead on goal difference, and needed to achieve a result that matched the Romanians' at Manchester United to reach the last 16. Cluj upset the Premier League leaders and group winners 1-0 but the Turkish
side matched them by chiseling out a late win on a cold evening at Braga's "quarry" stadium.

After several wasted chances Braga scored the opener through Brazilian attacking midfielder Mossoro within the half-an-hour. But in the second half Galatasaray reacted… They equalized through Burak
Yılmaz after 58 minutes before Aydın Yılmaz pounced for the late winner.

"There's a huge joy within the team now. Our coach Fatih Terim motivated us in a great way at halftime. We needed to make a comeback and we did so" Yılmaz told the UEFA website. "Coach Fatih Terim dressed us down a little in the dressing room but this gave us additional motivation and power".

The Portuguese started stronger and were quicker and more aggressive, dominating a surprisingly apathetic Turkish side who gave the ball away too easily. Braga's 24-year-old striker Eder wasted a good early chance, denied by a sliding tackle from Galatasaray's Felipe Melo. After a barrage of opportunities, the Portuguese deservedly went ahead. Mossoro made the most of a poor clearance effort from Melo, picked up the ball outside the box and shot home.

"We started the match badly, just couldn't get into the right mood. We realized that the outcome was going away from our hands and we returned to the game," Burak Yılmaz said.

Galatasaray compensated for a poor start with deadly attacking efficiency. Yılmaz continued his impressive form in the Champions League and extended his goal tally to six, leveling after 58 minutes with a textbook header. "Amrabat provided me a very good cross," he said.

With Terim increasingly desperate on the sidelines they completed their comeback through substitute Aydın Yılmaz when the midfielder pounced on a loose ball from a parried save by Braga keeper Quim to grab a memorable winner.

The following is a list of the teams that have qualified to go through to the knockout round: