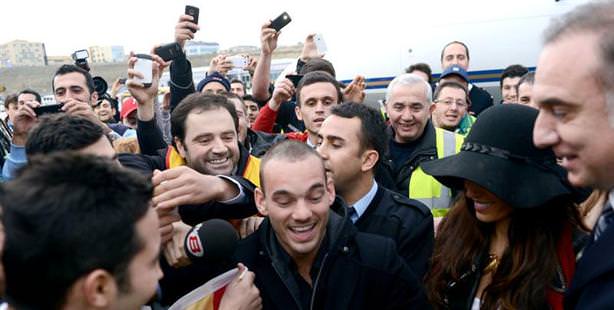 Wesley Sneijder, once one of the world's most outstanding players, arrived in Istanbul on Monday to tie up his move to Galatasaray after surprising pundits by choosing Turkey rather than a higher profile league. Galatasaray supporters came out in full fanfare to welcome the long-awaited player’s arrival, whose first test will be this Sunday’s derby against Beşiktaş.


Wesley Sneijder's arrival in Istanbul has been awaited by Galatasaray fans since January 8th. The second the Dutch star's highly anticipated transfer rang true, Atatürk Airport was shaken to the core with the arrival of throngs of fans hoping to catch a glimpse of the famous player who recently signed to Galatasaray from Inter Milan. Sneijder arrived to Istanbul by private plane from Milan at 16:00 where he was greeted by thousands of Galatasaray fans donning the team's yellow and red colors. As soon as he landed, the popular footballer got into a minibus that was waiting for him. He then changed into his new team's uniform and afterwards left the airport for the club's Florya Metin Oktay Facilities in a vehicle that had a sun roof from which Sneijder greeted his fans.

Reports said the likes of Premier League side Liverpool were also interested in the 28-year-old, who inspired Inter Milan to a Champions League, Serie A and Italian Cup treble in 2010 before helping the Netherlands finish second in the World Cup. Turkish leaders Galatasaray, who unlike Europa League contenders Inter are in the Champions League last 16, confirmed a deal was done after Sneijder first announced the move on Sunday following days of pondering their offer.

"An agreement has been reached," Galatasaray said in a statement on their website. "When the agreement is signed, after the player's medical, the details will be announced."

"It will be amazing and the atmosphere will be nice, I can't wait to go there and play my first game," Sneijder said.

He hopes to make his debut for the Super League champions in the derby with Beşiktaş on Jan 27.

Galatasaray Club Lutfi Arıboğan, who masterminded the Sneijder transfer, says that signing the Dutch player is extremely significant in light of the bad rep Turkey's football industry has received in Europe due to the game-rigging scandal, which was first investigated on July 3rd, Arıboğan notably points out.