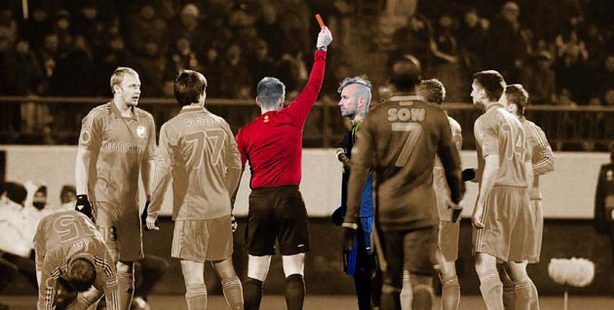 Fenerbahçe played a scoreless match last night against fellow UEFA Europa cup contenders Belarus’ BATE Borisov, which is considered a success since they went down to ten players before the fifth minute.

In just the fourth minute of the game, Raul Meireles tripped an opponent from behind, kicking Alexsandr Hleb twice in the middle of the pitch, only to receive a red card throwing him out of the game at the four-minute mark.

According to Fenerbahçe Coach Aykut Kocaman, this was the turning point of the game. "Meireles' actions were not befitting to game standards or to a quality person. That red card he received changed everything in the game from A to Z." Kocaman says the player will be penalized in accordance to Fenerbahçe's disciplinary procedures.

"BATE was an extremely organized and highly disciplined team on the field. They have received great results in the Champions League. After dropping to just ten players, what mattered for us most was to come out with a score that would offer us an advantage for the return leg. We put on a good struggle and were able to achieve a positive result," states Kocaman.

Fenerbahçe's second leg match against BATE Borisov for the final 32 in the UEFA Europa Cup will be played at home on February 21st.