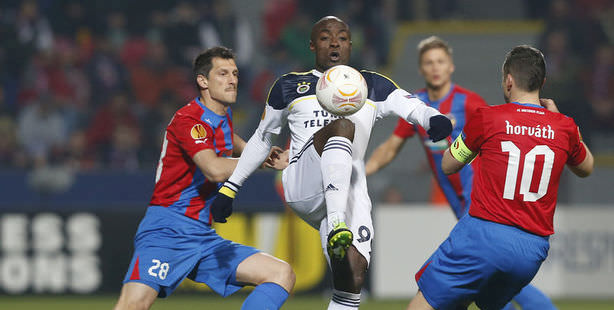 Fenerbahçe took home the victory in the first-leg of the UEFA Europa League round of 16 last night against Czech team FC Viktoria Plzeň with a single goal scored by Pierre Webó in the 81st minute. Played in Plzen for an audience of 11,000 Fenerbahçe deservedly secured the advantage last night for next week’s second leg game in Istanbul.

Fenerbahçe made the first attempt to score last night with a shot by Brazilian midfielder Christian Baroni in the 34th minute, saved by Victoria Plzen's goalkeeper Matus Kozacik. Just two minutes later the Czechs responded when Frantisek Rajtoral stole the ball from Selçuk Şahin to fire a shot that hit the crossbar. Fenerbahçe missed another surefire opportunity to score when Dutch player Dirk Kuyt received an excellent pass from Moussa Sow, however sent the ball wide.

The second half saw increased possession of the ball by Fenerbahçe as they remained steadfast in pursuit of an away goal. In the 58th minute, a shot by Sow threatened the Czech post; however goalkeeper Kozacik managed to deflect the ball. Intensified attempts to score continued with Baroni, Ziegler and Kuyt; however it was Pierre Webo who scored the sole and winning goal of the game in the 81st minute. Gökhan Gönül set the ball up for Sow who sent in a header which was deflected by Kozacik yet fell in front of Webo, who sent it into the empty goal post. Although the Czech side tried, Fenerbahçe managed to maintain their lead through the final minutes of the game, securing the advantage going into the second leg next week at home.

On Thursday, March 14th Fenerbahçe hosts FC Viktoria Plzeň in Istanbul for the return match in the round of 16, which will take them into the quarter finals of the UEFA Europa League.