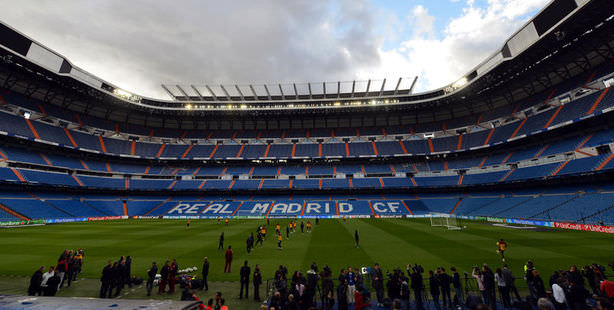 Galatasaray will be facing off against Real Madrid on Wednesday night in the Spanish capital for the first leg of the Champions League quarterfinals.

Turkey's champions Galatasaray takes on their Spanish counterparts Real Madrid for the first leg of the Champions League quarterfinals. The match pits Real Madrid's Turkish-German left-winger Mesut Özil and current goal king contender Cristiano Ronaldo against Galatasaray, who has forward Burak Yılmaz, who is tied with Ronaldo for the title having scored eight goals each. The match will also be a sort of reunion for two of Galatasaray's high-profile transfers, Didier Drogba and Wesley Snejder who have both worked with Real Madrid coach Mourinho in the past.

Tonight's match will be played in Madrid's Estadio Santiago Bernabeu with the return leg to be played in Istanbul on April 9th.

"They have a coach with experience in games at this level," Jose Mourinho said of his opposite number, former AC Milan and Turkey boss Fatih Terim. "They feel comfortable in games like this. He has no fear of playing here. He has people who have played in the greatest teams in the world. In Didier Drogba, Wesley Sneijder and Burak Yilmaz they have three players up front who can damage any side."

Real Madrid coach Jose Mourinho has defended his decision to leave 2010 World Cup-winning
captain Iker Casillas out of his squad again for Wednesday's Champions League quarter-final first leg with Galatasaray. The Spain goalkeeper is fit to train after recovering from a broken finger but will not feature in tonight's first leg of the quarterfinals.

Galatasaray's recent transfer Didier Drogba was Chelsea's key performer on their run to a first Champions League triumph last season before quitting the London club for a stint in China and then moving to Turkey. He struck the winning penalty in the final shootout against Bayern Munich having earlier kept Chelsea in the match with a crashing header two minutes from the end of regular time that leveled the score at 1-1, thereby securing Chelsea first-ever Champions League title.

Wednesday's clash, the fourth between the clubs in UEFA competition, also pits Drogba against his former manager at Chelsea Jose Mourinho, who is bidding to lead Real Madrid to the 10th European crown that has eluded the club since 2002. The pair were together at Stamford Bridge from 2004 to 2007 and won Premier League titles in 2005 and 2006.

Didier Drogba said Mourinho and his Galatasaray counterpart Fatih Terim were excellent motivators.
"Fatih Terim is a lot like Mourinho in that he is very close to the players and always talking with them," he said. "The psychological factor is very important in soccer and Terim is very meticulous in that respect."
While Real Madrid have fallen in the semi-finals the past two seasons, it is almost a quarter of a century since Galatasaray last reached the last four.

Alongside Drogba, the other heavyweight in their ranks is Dutchman Wesley Sneijder, who won the Champions League with Mourinho at Inter Milan in 2010. Their attacking trident is completed by Burak Yilmaz, who is joint top scorer in the competition with Real's Cristiano Ronaldo on eight goals.

Wesley Sneijder had a smile from ear-to-ear as he spoke confidently about Galatasaray's intentions of taking the game to Real Madrid in their Champions League quarter-final first leg on Wednesday. The Netherlands playmaker returns to the home of a club he left in 2009 after failing to win a regular first-team place and the scene of his and Inter Milan's Champions League triumph over Bayern Munich in the 2010 final. Sneijder will be taking on his former boss from Inter, Jose Mourinho, under whom he won a treble of the Champions League, Serie A and Italian Cup three years ago.

"All I want to say about Mourinho is that it is amazing to play against him tomorrow," he said. "We had a great time together. But for one time we have to forget that. Tomorrow we are enemies. No more friends." Considered by pundits as one of the weakest sides in the last eight of Europe's elite club competition, Sneijder displayed a bullish desire to prove doubters wrong about Galatasaray. "It's very important to score an away goal, but it is more important not to lose and even more important to win," he said. "We are here to win the game. We are not here to defend or to wait. We are here to play our own game. It is not a surprise we are in the quarter finals because we have a strong team and we are growing and growing every week. We are very confident. I say it again. We are here for the victory."

Asked about his thoughts of Turkish football after three months, the Dutchman said he was impressed.
"I was very surprised. The level is very high," he noted. "If I am honest, when I went there I thought maybe there are four or five good teams, strong teams, but every game is difficult. "The level is getting higher and higher."

The game will be broadcasted live on D-Smart at 21:45 local time.