Galatasaray were the victors yet Real Madrid made the tour 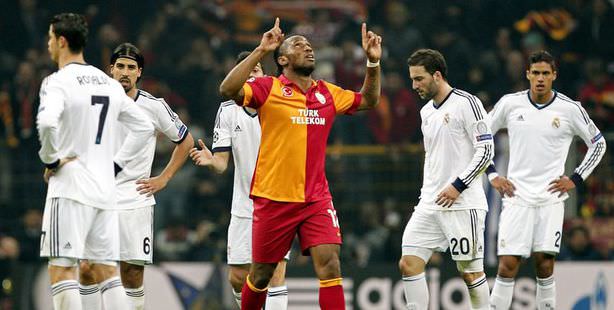 Galatasaray’s comeback in the second half of last night’s Champions League quarterfinal brought the hosts the 3-2 victory. With the 3-0 aggregate from the first leg however, last night’s victory was not enough to grant Galatasaray the highly coveted spot in the semi finals and Real Madrid is the side that moves on.

Cristiano Ronaldo scored twice as Real Madrid, aiming to become kings of Europe for the 10th time, foiled a dramatic fight back by Galatasaray on Tuesday to reach the Champions League semi-finals. Ronaldo, top scorer in the competition, took his goal tally for the season to 11 to make sure that Jose Mourinho's side went through to the last four 5-3 on aggregate despite losing the second leg 3-2 in Istanbul.

Mourinho praised the passionate support generated by the home crowd and the spirit of the Galatasaray players. "We always want to play in an atmosphere like the one in the stadium tonight," he told reporters. "I don't think our players were affected by it but the Turkish players were really affected. They used the atmosphere in the second half and played a fantastic match. They were knocked out but if only all clubs would go out in the same fashion - they put their heart and pride into it."

Real took an early lead when Ronaldo slid the ball in from two meters following a low cross from the right by Sami Khedira just seven minutes into the game. Emmanuel Eboue then galvanised Galatasaray into action with a piledriver of an equaliser from the edge of the area in the 57th minute. Wesley Sneijder made amends for a glaring missed moment earlier when he added a second goal for Galatasaray by sending the ball between the legs of Real defender Raphael Varane before supplying a neat finish. Didier Drogba, Chelsea's hero in last year's final, then sent the noisy crowd into raptures with a delightful back heel following a cross by substitute Nordin Amrabat. Real substitute Alvaro Arbeloa was sent off in the closing stages for a second caution but Ronaldo settled his team's nerves by adding his second goal in stoppage time after good work by Karim Benzema.

Coach Fatih Terim said he was delighted with the home team's second-half fight back. "I gave my word to the fans that whether we won or lost, it would be with a Galatasaray team they could be proud of," he
explained."Our fans were also magnificent. There was a fantastic atmosphere and when they enjoy the game, we do too."

Real Madrid coach Jose Mourinho saluted the passion of the Galatasaray fans on Tuesday as well
after his team scrambled past the Turkish side into the Champions League semi-finals. Mourinho's men had to weather a second-half storm to go through 5-3 on aggregate even though Galatasaray scored three second-half goals in quick succession to win the second leg 3-2. "I had no time to be nervous," Real's coach told reporters. "I don't have time to feel nervous on the sidelines. I know Galatasaray are strong. They did not play with 11 men today; they played with 50,000 incredible supporters. It was hard for us and they deserved to win tonight."

Master tactician Mourinho, bidding to become the first coach to lift Europe's top club trophy with three teams after winning with Porto in 2004 and Inter Milan in 2010, said he adjusted his team when they fell 3-1 behind. "I put Raul Albiol in front of the defense and things started to calm down," the Portuguese explained. "In this kind of match we had everything to lose and nothing to gain. I have always felt these players are ready to work and have great motivation to get to the finish line and play in the final."

Two-goal marksman Cristiano Ronaldo said Real would learn from their Istanbul experience. "This match will serve as an example for us in the future," he told Spanish broadcaster TVE. "In football you cannot just give chances away. "They made things hard but in reality we were the ones who made things complicated for ourselves. We must make sure that we are switched on for the full 90 minutes."

Galatasaray coach Fatih Terim said he was proud of the effort his players gave after appearing to be down and out following a 3-0 first-leg defeat in Spain. "Maybe we couldn't knock Real Madrid out of the competition but we deserve the respect of the whole world," said Terim. "I hope they win the Champions League so then we can say we lost to the champions. Thanks to Real Madrid and Jose Mourinho. The coach of one of the best teams in the world came to our dressing room to congratulate us," he added. "There's nothing that Turkish players can't achieve with proper coaching. We need to improve every minute, we need to keep our heads up and continue on our way."