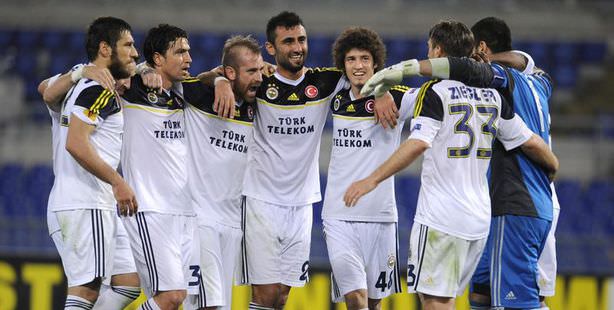 Fenerbahçe secured a spot in the UEFA Europa League semifinals last night when a 1-1 draw against Lazio brought them up 3-1 to be victors in the round on aggregate.

Fenerbahce reached the Europa League semi-finals after a hard-fought 1-1 draw at Lazio saw them progress 3-1 on aggregate to seal a place in the last four of a continental competition for the first time ever.

Senad Lulic gave Lazio hope of an unlikely comeback with a thumping header on the hour but Caner Erkin's strike after 73 minutes with Fenerbahçe's only shot on target took the pressure off the Turkish side who eased into the last four.

Lazio, who had to play the game behind closed doors at the Olympic stadium as a punishment for their fans' poor behavior, had the best of a tight first half but had to be content with shooting from range. Ederson came closest to bringing the tie to life four minutes before the break as Lazio pressed; ramming a close range shot against keeper Volkan Demirel's feet from a tight angle. Midfielder Lulic got Lazio back into the tie when he powered home a header from Antonio Candreva's superb free-kick. But despite dominating play and frequently forcing the visiting side into some clumsy defending, Lazio were effectively out of the competition 13 minutes later when Erkin struck.

Pierre Webo did well to set up the Turkish international, which dropped his shoulder to send right back Michael Ciani the wrong way before firing home at Federico Marchetti's near post leaving Lazio needing three goals to go through. The hosts did not give up and could have scored twice more, first when Demirel had to stretch to save Lorik Cana's powerful header after 82 minutes and two minutes later when Joseph Yobo almost headed past his own keeper from outside the area.

But Fenerbahçe held on to take their place in Friday's semi-final draw and leave the Italians lamenting their missed chances. It seems Fenerbahçe is now becoming accustomed to playing in empty stadiums as last night's game was the third played without spectators in contending for the cup.

Fenerbahçe made history last night by qualifying for the UEFA Europa League semifinals. Fenerbahçe is joined by Chelsea, Benfica and Basel for Friday's drawing to determine the match up for the final four.