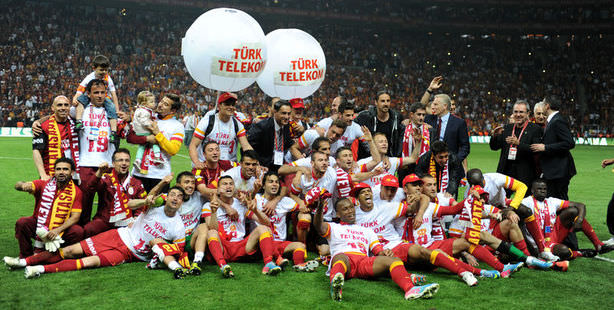 Galatasaray clinched their 19th Turkish league title with a 4-2 win over Sivasspor on Sunday, crowning a successful season in which they reached the quarter-finals of the Champions League and claimed the Super League title two weeks early.

Galatasaray has officially become the highest championship winning team with 19 titles, since the founding of the league in 1959. Up until last night's 4-2 win against Sivasspor, which has secured the team the title with two weeks left in the season, Galatasaray was tied with arch rivals Fenerbahçe for having won the same number of titles. Last night's victory has solidified Galatasaray's reign as champion and fans of the club filled the streets all over the country as well as abroad, sounding car horns, setting off flares and waving flags in the club's red-and-yellow colors as they sang in the city's squares.

With two weeks remaining in the season, Galatasaray eased to victory with two goals a piece from top goalscorer Burak Yılmaz and Selçuk İnan. They now have 68 points. Istanbul rivals Fenerbahçe, who have won the title 18 times, slumped to a 2-0 defeat at Büyükşehir Bld. Spor, leaving them 10 points adrift of the leaders and just three points ahead of Istanbul's Beşiktaş.

Coach Fatih Terim, in his third spell in charge of Galatasaray, retained the title after strengthening his squad with the signings of Didier Drogba and Wesley Sneijder earlier this year. Terim was forced to watch his team's triumph from the stands as he is serving a nine-match ban following a spat with a referee during a league match last month. "We are deserved champions with the way we played and fought. I thank the fans as well. I greet all the Galatasaray fans around the world," he said. It was the sixth time that Terim has led the club to success in the Super League.

Forward Burak Yılmaz, who is also the top scorer in the league, was key to Galatasaray's success on the pitch this season, supported ably in attack by Umut Bulut. But the eye-catching addition of Sneijder and Drogba, last season's Champions League hero for Chelsea, fuelled the club's passion in the latter part of the season. Galatasaray went on to beat Real Madrid by 3-2 in their Champions League pursuit which they had to drop out of due to the 3-5 aggregate against the Spanish La Liga champions.

On Sunday May 12th, Fenerbahçe hosts Galatasaray for the last derby of the season however the match will solely be a formality as there is no possible way Fenerbahçe, which is second in line to Galatasaray for the title, can recover the league leader's ten point lead in just two weeks. On May 19th, Galatasaray closes the league with a final match against Trabzonspor, after which they will be handed the championship trophy.