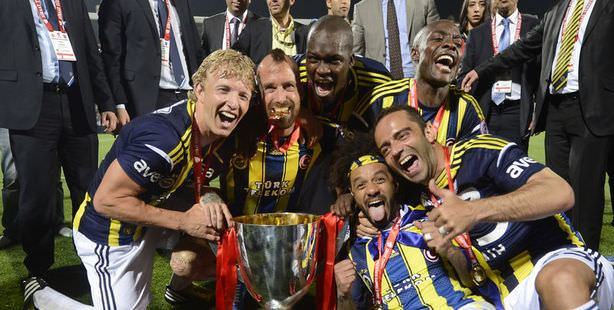 Fenerbahçe lifted up their second Turkey Cup trophy in a row last night beating out Trabzonspor by 1-0 in the Ziraat Turkey Cup final held in Ankara.

Fenerbahçe beat Trabzonspor 1-0 to retain the Turkish Cup on Wednesday after an early goal from
Moussa Sow, gaining some consolation for finishing runners-up in the league to Galatasaray.

Nine minutes into the game in Ankara, the Senegalese striker slid the ball home after a pass from Mehmet Topal on the halfway line. In what turned into a fast-paced final, Fenerbahçe racked up several more chances, including a free kick from Brazilian midfielder Cristian Baroni which was pushed over the bar seconds before halftime and a saved effort by Sow in the 55th minute.

Trabzonspor created their own opportunities, the best of which came in the 58th minute when a strike from Polish midfielder Adrian Mierzejewski went close. Black Sea side Trabzonspor, regularly among the main challengers to the big three Istanbul teams, finished a lowly ninth in the league. They lost 2-0 last Saturday to champions Galatasaray in the final league game.

The week prior in the league, Fenerbahçe beat out Galatasaray at home by 2-1 in a highly charged derby between the two infamous archrivals. Fenerbahçe, who finished 10 points behind Istanbul rivals Galatasaray in the league, reached the semi-finals of the Europa League this season in a historical first before losing to runners-up Benfica.

Fenerbahçe won the Turkish Cup last year for the first time in 29 years and last night's victory marks the sixth Turkey Cup win for the club.