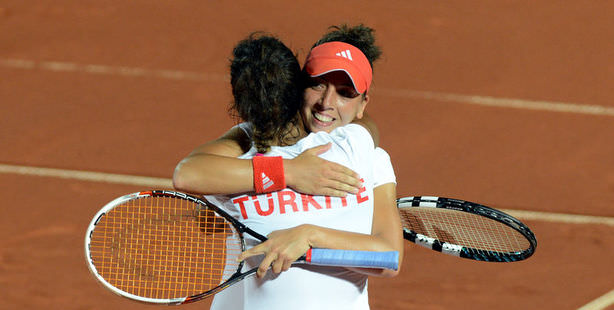 Cagla Buyukakcay and Pemra Ozgen have won Turkey the gold medal in tennis for women’s doubles in the 17th annual Mediterranean Games.

Turkey's Cagla Buyukakcay and Pemra Ozgen won the gold medal by defeating Italy in women's doubles in the final match played on Friday for the 2013 Mediterranean Games being held in Mersin.

The Slovenian duo Blaz Rola and Tomislav Ternar won the gold medal in the final match in men's doubles in tennis.

Tunisia's Mohamed Abid and Malek Jaziri duo suffered a 2-1 loss by their Slovenian victors and received the silver medal.

Turkey ranks second and Italy remains at the top for medal rankings in the 17th Mediterranean Games.

France maintained its place in third while Egypt has surpassed Spain to advance to the fourth place ranking.