It is time to write history 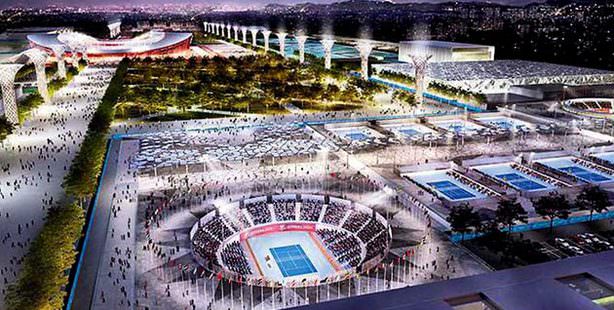 Tomorrow a very special Istanbul delegation will pull out all the stops in the candidate city’s bid to host the 2020 Olympic Games as the final decision is put to a vote on Saturday by the International Olympic Committee in the Argentinean capital of Buenos Aires.

Istanbul's bid to host the 2020 Olympics comes to a close tomorrow as the International Olympic Committee (IOC) convenes in Buenos Aires to vote between Istanbul, Madrid and Tokyo to determine which city will host the 2020 summer games. The vote will take place on Saturday following a final round of presentations in which Istanbul's delegation plans to pull out all the stops.

The Istanbul 2020 bid delegation will be making a final presentation to IOC members at the Hilton Hotel in Buenos Aires on Saturday. The presentation, based on the theme "History in the Making" aims to emphasize the historical firsts that will be realized should Istanbul be selected to host the 2020 Olympic Games. The delegation will be imploring that IOC members "make history" by selecting a country that will be hosting the summer games for the first time ever, and on two continents. The delegation will also point out that this would mark the first time the Olympics are held in a country where half of the population is under the age of 25 and in a city that acts as a bridge between religions and cultures. The Istanbul bid slogan, aptly entitled "Bridge Together" is said to be a favorite. Sources say the delegation will also be mentioning the support received by representatives of the four Abrahamic religions for Istanbul's 2020 Olympic bid. According to information obtained, the Istanbul delegation has also included a number of surprises in their presentation for IOC members on Saturday prior to the final vote.

PM TO FLY IN FROM RUSSIA

Prime Minister Recep Tayyip Erdoğan will be leading the Istanbul 2020 delegation in Buenos Aires. The Prime minister, who will be flying into Argentina from Russia, where he is currently attending the G-20 summit in Buenos Aires, will be accompanied by a delegation of nearly 200 for the meeting on Saturday to determine Istanbul's summer games fate. Deputy Prime Minister Ali Babacan, Youth and Sports Minister Suat Kılıç and Minister of Environment and City Planning Erdoğan Bayraktar will also take part in the presentation.

KINGS AND QUEENS TO ARRIVE

As is the case with Turkey, state leaders of Istanbul's rival candidate cities, Madrid and Tokyo, will also be on hand for tomorrow's vote. King of Spain Juan Carlos will be leading the Madrid delegation, which includes Prince Felipe and Spanish Prime Minister Mario Rajoy. Japanese Queen Empress Michiko and Prime Minister Shinzo Abe will lead Tokyo's delegation.

HOW WILL THE VOTING TAKE PLACE?

Prior to tomorrow's vote candidate cities Istanbul, Tokyo and Madrid will make their final presentations. Following each 45-minute presentation will be a question and answer session. Jacques Rogge, president of the 103-delegate IOC, has chosen to abstain from the vote. Candidate nation representatives, Spain has three and Japan and Turkey one each, will also be absent from Saturday's vote. A total 97 members are expected to vote twice tomorrow. The first round of voting will eliminate one country after which IOC members will resume to vote between the remaining two candidate cities. The voting, held by secret ballot, will begin at 21:45 Turkish time, following the candidate cities' final presentations. At 23:00, the delegations for the two final cities will be invited into the hall for the IOC President to announce the winning candidate to host the 2020 Olympics and Paralympics Games.

GIANT SCREEN SET UP IN SULTANAHMET FOR LIVE RESULTS

Istanbul will be able to watch the moment simultaneously as the winning city is announced in a live broadcast from mega screens set up in Sultanahmet Square.

Istanbul has made four previous bids for the Summer Games. The city was a candidate for the 2000 Games, which were awarded to Sydney. It bid again for 2004, which were held in Athens, but failed to become a candidate city. It became a candidate for 2008 but lost to Beijing. The Turkish city's most recent bid was for the 2012 Games but once again, it failed to become a candidate. London was awarded the 2012 Games. Istanbul's 2020 bid is their fifth bid. If the city wins the bid, Turkey would be the 24th nation to host the Olympic Games and the first Muslim-majority nation to host the Games. Both Turkey's rivals for the Olympics, Japan and Spain, have hosted the games before, Tokyo in 1964 and Barcelona in 1992.