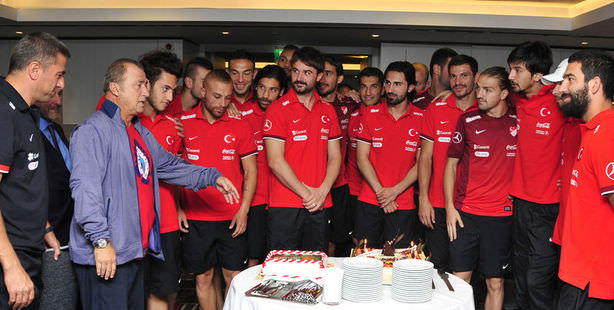 Turkey’s National football team faces off against Andorra on Friday in Kayseri for a chance to qualify for the 2014 World Cup finals.

Turkey's national football team will take on Andorra on Friday in the central Anatolian city of Kayseri in a Group D match to qualify for the 2014 World Cup finals in Brazil.

Turkey is currently holding the fourth position out of the six teams competing in Group D's qualifying round. Turkey currently stands with just seven points after playing six games with two wins, three losses and a single draw. Andorra holds up the rear o the group standings with 0 points and six losses.

Turkey is hoping to win the first of the four remaining games with a good score to have any chance of qualifying for the 2014 World Cup finals. However, technical director Fatih Terim vows to win all four of the remaining qualifiers. On September 10, Romania hosts Turkey for the final third game in the qualifier round and on October 11, the Turkish national team plays in Estonia. On October 15, Turkey hosts Group D leaders Netherlands for a final chance to make it past the qualifier round.

Tonight's game kicks off at 21:00 local time and will be broadcasted live on Star TV.

In other Group D matches on Friday, Romania will host Hungary while Estonia will take on leaders Netherlands in Tallinn.