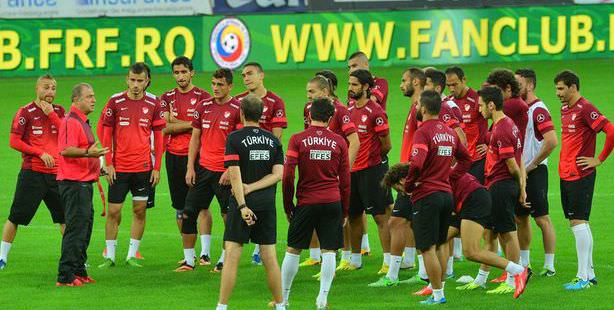 Turkey will play against Romania for a must-win game to maintain any hope to secure a spot in the 2014 World Cup.

Turkey's national football team faces off against Romania tonight in an away game that may determine their fate in the 2014 FIFA World Cup in Brazil. Romania is currently in second place in Group D, three points ahead of Turkey, which covets their spot.

The team is in high spirits after beating Andorra 5-0 last Friday, however to qualify, Turkey needs to win all of their remaining three matches and hope for a specific set of results from the remaining teams in group D. Turkey must not only beat Romania tonight, but also Hungary, currently sitting in third place, needs to lose against Estonia for Turkey to have a chance to advance. In this situation, Turkey would land into second place and keep its slim chance of joining the 2014 World Cup in Brazil. Also playing tonight in Group D are the Netherlands against Andorra.

Turkey is currently in fourth place with ten points in Group D, three points behind Romania, which is in second place behind leaders the Netherlands with 19 points. Turkey trails Hungary, which is in third place with 11 points. Turkey suffered a number of early losses in the qualifier round, including a 1-0 loss to Romania when the two last played in Istanbul. On October 11, the Turkish national team faces off against Estonia in an away game and on October 15, Turkey hosts Group D leaders Netherlands for a final chance to make it past the qualifier round. With the Netherlands the runaway leader of Group D, Turkey is hoping to secure the second place spot to continue their plight to play in the World Cup in Brazil. The top-standing teams automatically advance in the qualifier round, however the eight best group runners-up will be paired into four home-and-away ties, from which the best four teams will advance.

Turkey in pursuit of a miracle

Newly appointed Turkish national team coach Fatih Terim admitted on Monday that the team is chasing a miracle. "If we prepare well, work hard and reflect those efforts on the pitch, I am fully confident that we can achieve our miracle. I will certainly put all my efforts towards this and pray for it to happen," he said.

Fatih Terim was signed on a four-match deal after Abdullah Avci resigned following a dismal performance. Terim coaches league champions Galatasaray, the only Turkish club to have won the UEFA Cup, now called the Europa League trophy, in 2000.

The 2014 FIFA World Cup will be played in Brazil, and 32 countries will take part. Japan, Australia, Iran and South Korea have secured their qualifications. Sixty-six teams remain in competition for the 27 remaining spots in the world's top football tournament, which will be held in Brazil next summer from June 12 to July 13.