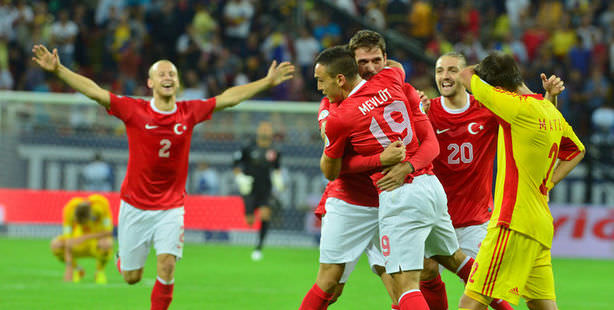 The Turkish national football team achieved a 2-0 victory in an away game against Romania last night, keeping their World Cup hopes afloat.

The Turkish national football team defeated Romania by 2-0 in an away game for the Group D qualifiers, keeping hopes alive that Turkey will secure a spot in the 2014 FIFA World Cup in Brazil.

Turkey came out the victors as striker Burak Yılmaz scored a goal in the first half and Mevlüt Erdinç sealed the deal with a final goal in the last minute added at the end of the game. The victory was a sweet recovery for Turkey's national team, which had lost the first leg played against their Romanian rivals in Istanbul by 1-0.

Turkey started off the night in fourth place of Group D, however yesterday evening's victory has bumped the team into the third spot ahead of Romania, though both tie with 13 points each. Hungary's 5-1 win against Estonia was not the best outcome for Turkey, which was hoping to slip straight into second place in group D. However, Hungary maintains the stronghold at 14 points, just one point ahead of Turkey. Netherlands, which beat Andorra in last night's face-off, is now the group's runaway leader with 22 points. Turkey is hoping to secure the second place spot to continue their plight to play in the 2014 World Cup in Brazil. In order to do so they must not only win the remaining two group qualifiers, but current second spot-holder Hungary must also lose points. The top-standing teams automatically advance in the qualifier round, however the eight best group runners-up will be paired into four home-and-away ties, from which the best four teams will advance.