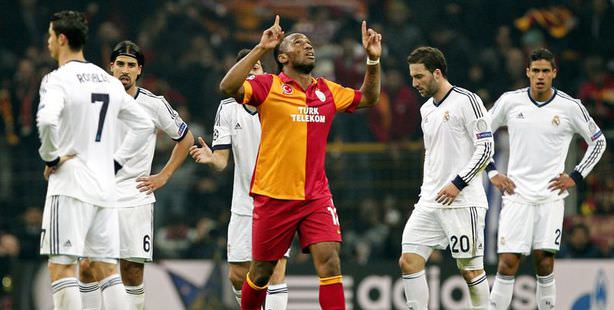 In fact, Galatasaray have won three and Real Madrid two out of the overall games played between the teams. Tonight Galatasaray will be trying to maintain that leading average. After losing out to Real Madrid last season in the Champions League, Galatasaray returns tonight for a 12th season in the European league. Galatasaray has had a halted start to the Super League with only one win and three draws in the first four games played thus far this season, however Terim's players are hoping to transfer the atmosphere they experienced in the Emirates Cup to the TT Arena. British referee Mark Clattenburg will be overseeing the game, which kicks off at 21:45.

Galatasaray won the first game played between the two teams in back in 2000, by 2-1 in the Super Cup final. That same season, the two contended in the Champions League quarterfinals with Galatasaray coming out on top by 3-2 after losing to Real Madrid by 2-0. The teams met again last season for the Champions League quarterfinals in which Galatasaray lost the first leg played in Santiago Bernabeu and then won the second leg in Istanbul by 3-2 only to be eliminated by the aggregate.

"We are one of the favorite teams in the group," said Drogba. "I am an experienced footballer and I want to reflect this on to the group games. Our goal is to make it past the group round. I hope I will score a lot of goals, but what matters most is the team winning," Drogba told reporters.

Fatih Terim says Galatasaray needs to make double digit points in the group stage to qualify. "We are playing in a group in which Real Madrid is the favorite. Last year we had just one point going into the last three games and then we finished off with ten points. I hope this year we will reach double-digits to ensure we make it past the group round," said Terim.

Commenting on the last time the two teams faced off , Coach Terim said, "There were two penalties that weren't given to us in the game we played in Madrid, and their first goal here was offside. Nobody should expect a Galatasaray that will easily succumb to Real Madrid. We may lose the game, however it will be a Galatasaray that will hold its head up high against Real Madrid. "

Real Madrid arrived to Istanbul with new transfer Gareth Bale and star player Cristiano Ronaldo. However, out with injuries, Marcelo, Xabi Alonso, Coentrao and Raphael Varane will not be playing tonight.