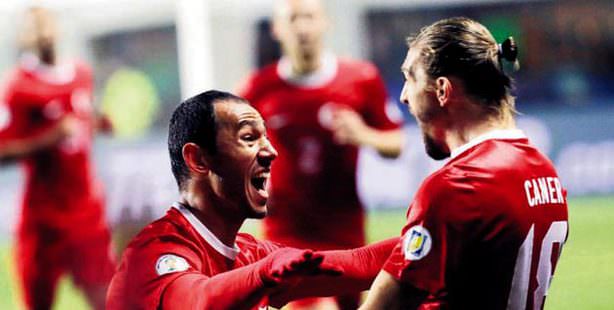 With last night’s 2-0 win against Estonia for the first of the final two games in the qualifying stage for the 2014 FIFA World Cup in Brazil, Turkey is just one giant hurdle away from finishing off the group stage in second place, which would give the team a last-ditch chance to continue on in the play-offs. On Tuesday, Turkey will host Holland for a game that will ultimately determine Turkey’s World Cup fate.

Turkey brought home a victory last night in the 2014 World Cup group qualifying stage, beating Estonia by 2-0 in Tallinn with goals by Umut Bulut in the 22nd minute and Burak Yilmaz in the 47th minute. The win has secured Turkey the second spot in Group D with 16 points, trailing vastly behind Holland who leads the group with 25 points after last night's 8-1 win against Hungary. Holland's heavy-handed victory worked to Turkey's advantage as Hungary who led by one point going into last night's game now trails in fourth place behind Turkey and Romania. Turkey's same-point rivals Romania also brought home a 4-0 win, however; they trail Turkey due to goal averages and currently stand in third place with 16 points.

Turkey will now have to face what could easily be considered one of its most difficult and high-stake challenges by hosting group runaway leaders the Netherlands on Tuesday in Kadıköy. Should our national team beat the Dutch superstars, Turkey will most likely have secured the second spot in Group D, which will grant them the opportunity to take part in the play-offs for an ultimate spot in the 2014 World Cup finals in Brazil. Tied for points but trailing on goal difference, Romania will play Estonia on Tuesday and Hungary, who trail by two points, will face-off against Andorra.