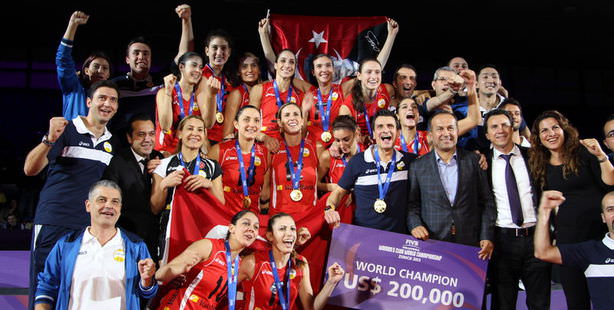 With yesterday's victory, Vakıfbank has now claimed the World Championship title, which was the only title the team had yet to add to their roster, after experiencing a season last year in which they won every single game played. Starting the season by winning the Turkey Super Cup, the only trophy the Vakıfbank Istanbul Women's Volleyball team was missing was handed to them Sunday night in Zurich after beating Brazil's Unilever Volei in three straight sets. Vakıfbank's Jovana Brakocevic was also named the tournament's Most Valuable Player.

Not only was Sunday's victory the team's 52nd consecutive win, but it was also Vakıfbank's fourth title this season after winning the Turkish League, the Turkish Super Cup, the CEV Champions League and now the FIVB Women's Club World Championship which ran from October 9 to 2013 in Zurich, Switzerland.

GOLD FOR THE GOLD

Yesterday's gold medal win in the FIVB Women's World Championship will not only grant the team the 200,000 dollar cash prize, but according to the Turkish Sports General Directorate, the team will also be awarded in Cumhuriyet Gold for displaying excellence in performance. Each team member will receive 500 Cumhuriyet Gold coins each, while the team will be given 3,000 Cumhuriyet Gold Coins, which means the total amount of gold to be lavished on Vakıfbank will be 9,000 coins.