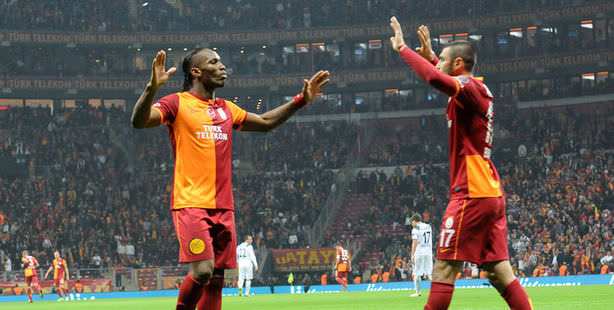 On Tuesday night, Galatasaray take on Group B rivals FC Copenhagen in the Danish capital to secure a spot in the Champions League knockout round.

Galatasaray face-off against FC Copenhagen on Tuesday for their fourth qualifier in Group B of the Champions League. Tonight's game kicks off at 21:45 local time and will be played in Parken Stadium. This will be Galatasaray's first venture to the Parken Stadium in 13 years after beating Arsenal in penalty shots to clinch the UEFA Cup title in 2000.

Galatasaray currently stands in second place with four points in Group B following heavyweights Real Madrid, who are the far-away group leaders at nine points. Juventus trails in third with two points while Copenhagen takes up the rear with a single point. Also in Group B, Juventus will host Real Madrid with a 21:45 kick-off time.

Galatasaray suffered a heavy blow in their first Champions League trial this season at home against Real Madrid. The team then went on to secure a two-all draw against Juventus in a match that was also Galatasaray's new coach Roberto Mancini's debut with the team. Galatasaray's last Champions League foray was played on October 23 when they hosted Copenhagen to a 3-1 win. Tonight, the team hopes to secure another victory against their Danish rivals to solidify their spot in second place and a chance to continue on to the knockout round of the final 16 consisting of the top two teams in each of the eight qualifying round groups all vying for one of two spots in the finals. The Champions League title will ultimately be determined by a final, which will be played in the Estádio do Sport Lisboa e Benfica on Saturday May 24, 2014.

After tonight's game, Galatasaray will face off against Real Madrid in Spain on November 27 and on December 10 they host Juventus for their final foray in the Champions League group qualifying stage.

Galatasaray will be missing two key players in what will be their second venture against FC Copenhagen within two weeks' time. Goalkeeper Fernando Muslera is out with a broken toe, while attacker Wesley Sneijder has also stayed home due to a muscular back injury. The two will also be absent from this weekend's critical derby against archrivals Fenerbahçe in the Spor Toto Super League.

Tonight's match will be overseen by England's Football Federation referee Martin Atkinson, who will be joined by assistant referees Peter Kirkup and Simon Long.