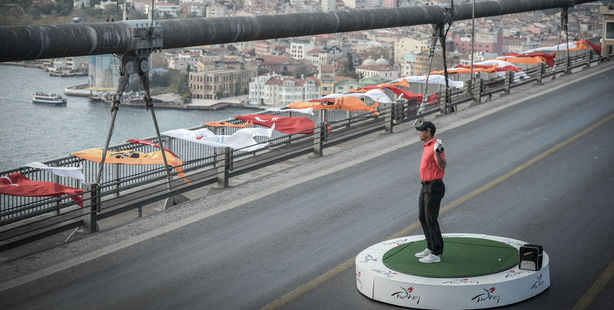 Tiger Woods participated in a unique golf ball-hitting event held on the Bosphorus Bridge in which he became the first golfer to hit a ball from one continent to the other. The unique show that took place on Istanbul’s Bosphorus Bridge was held to promote the Turkish Airlines Open 2013 Golf Tournament held in Antalya’s popular Belek destination, which is set to host some of the world’s greatest golfers from November 7 to 10.

The world's number one golf player Tiger Woods participated in a unique golf-ball hitting event held on Istanbul's Bosphorus Bridge on Tuesday, making him the first golfer to strike a ball from one continent to another. Tiger Woods landed on the Bosporus Bridge by helicopter as one side of the bridge was closed to traffic from 2 pm to 3 pm on Tuesday for the historical event, held to mark the opening of the Turkish Airlines Open 2013 Golf Tournament, which commences in Antalya on Thursday.

The Turkish Airlines Open 2013, which is the third leg of the PGA Europe tour final series and Turkey's first time hosting an official European tour event, will run from November 7 to 10 in the popular tourist destination town of Belek, located in the southern Mediterranean coastal province of Antalya. Tiger Woods is just one of 78 international golfers set to attend the seven million dollar award-winning tournament.