Galatasaray concedes to 1-0 loss against Copenhagen 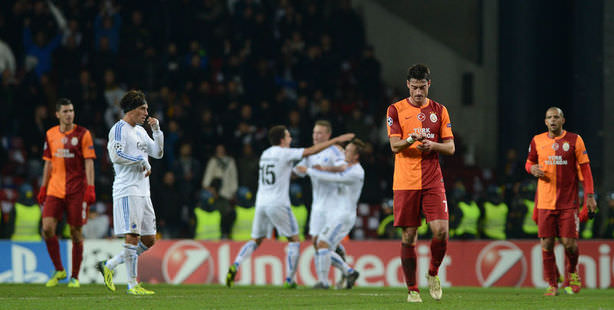 Galatasaray suffered a heartbreaking 1-0 loss against FC Copenhagen in last night’s Group B qualifier for the Champions League. Not only did Turkey’s reps have numerous chances to score but controversial referee calls may have also led to last night’s loss in what was once considered Galatasaray’s luckiest stadium.

Galatasaray suffered a rough blow last night, losing out 1-0 to FC Copenhagen in Denmark's Parken Stadium. This was Galatasaray's first return to Parken Stadium in 13 years after beating Arsenal in penalty shots to clinch the UEFA Cup title in 2000. Nevertheless, last night it was detected early that Parken Stadium was no longer a "lucky charm" for the "lions" as Daniel Braaten's goal, which came in just the sixth minute would remain the sole score of the night.

Luckily, Galatasaray still maintain their position in second place in Group B with four points. Copenhagen now closely follow in third and also with four points. Real Madrid is the far-away leader with ten points after a 2-2 draw last night against Juventus, which now take the rear with three points.

GROUP STANDINGS UP IN THE AIR

By losing to FC Copenhagen last night, Galatasaray let go of what could have been a very important advantage for their hopes of securing the top second spot in Group B. Had the "lions" managed to secure even a draw that extra point in their pocket would have guaranteed the team at least third place, which still means a ticket to Europe. Additionally, if Galatasaray had won, then even if they were to suffer a draw against Juventus in the Arena they still would have continued on the Champions League. The only point of rejoice for Galatasaray was last night's 2-2 draw between Juventus and Real Madrid. If Juventus had come out the victors in last night's game in Torino, it would have been equivalent to Galatasaray being straight up eliminated from the Champions League knockout round. As it stands, if FC Copenhagen does not sign on to a miracle by way of securing four points in their upcoming games against Juventus and Real Madrid, then Galatasaray will be playing a fate-determining mach against Juventus in the Arena.

DROGBA: THE STRINGS ARE IN OUR HANDS

Commenting after the game, Galatasaray's legendary striker Didier Drogba said that the team played well, however they were simply unable to score. "When the groups were first drawn, nobody thought we would be able to make it past this round. However, the strings are in our hands to make it to the knockout round. If we can secure a point against Madrid and beat Juventus, we will make it past the group stage," said Drogba.

Galatasaray Coach Roberto Mancini stated, "I don't think we deserved to lose. We now have to beat Juventus in Istanbul in our final game." Qualifying the 1-0 loss as "a bad result", the Italian technical director stated, "We played well. A draw would not have been any better, we deserved to win. Our only issue was not being able to score a goal despite playing well." This was the first time Galatasaray has failed to score in their rivals' goal post since the Italian expert coach took on the helm. In the past six games played under Mancini's leadership, Galatasaray has scored a total 14 goals.

Galatasaray will next face off against Real Madrid in Spain on November 27 and on December 10; they host Juventus for their final foray in the Champions League group qualifying stage.