PM Erdoğan shows his support for Trabzonspor in Poland 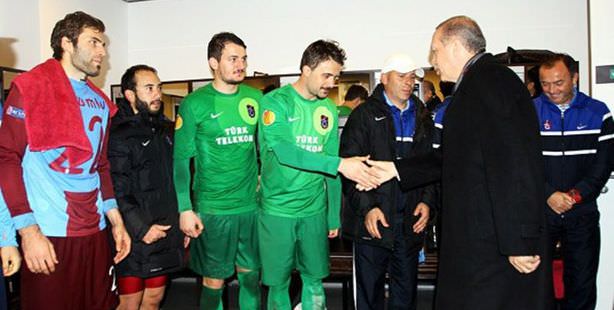 Trabzonspor knocked out a successful 2-0 win against their Polish rivals Legia Warsaw on Thursday pitting them in the top spot in Group J for the qualifying round of the Europa League finals. Also in Warsaw, Prime Minister Erdoğan paid a visit to the team and congratulated each player on their success in their Europa Cup campaign.

Prime Minister Recep Tayyip Erdoğan paid a very special visit to the Wojska Polskiego stadium on Thursday to offer his support for Trabzonspor, which marked another victory against Legia Warsaw solidifying their spot in the top position of Group J for the UEFA Europa League.

Prime Minister Erdoğan, who happened to be in Poland on Thursday night, which he made a stop after an official visit to Finland and Sweden, stopped by to watch the end of Trabzonspor's away game against Legia in Warsaw, which the Turks won by 2-0.

Erdoğan then proceeded to visit the team in the locker rooms, where he congratulated and shook the hands of every player. "I am so very pleased. However, I was only able to make the end of the game. I hope that you will also win the game again Limassol and qualify for the next round as the leaders of your group. I want to congratulate all of the administrators, the technical staff and our footballers and wish the best of luck for our Trabzonspor," stated Erdoğan.

Prime Minister congratulates each and every player

Prime Minister Erdoğan attended last night's game with AK Party Deputy Chairman Numan Kurtulmuş, ministers Egemen Bağış and Zafer Çağlayan and sat with Trabzonspor Club President İbrahim Hacıosmanoğlu. At the end of the game, Erdoğan paid a visit to the players in the locker room, where he congratulated and shook the hands of each member of the team.

Trabzonspor walked away with the win last night after a first goal came in the 71st minute by Legia's Dossa Junior, who scored into his team's own goalpost. Trabzonspor's Olcan Adın sealed the deal soon after in the 79th minute and secured Trabzonspor's spot at the top of Group J.

Trabzonspor will host Apollon Limassol on Nov. 28 and will face a final group qualifier against hosts Lazio on December 12.