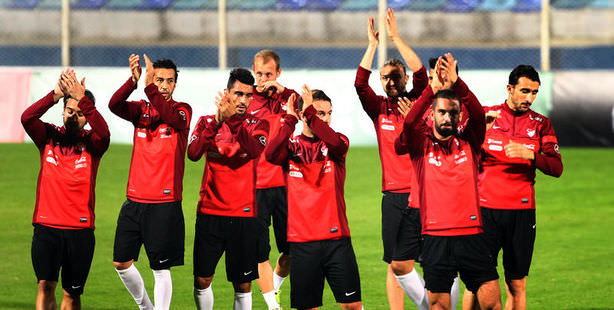 Turkey’s national football team kicks off its preparations for qualification in Euro 2016, by hosting a friendly game against Northern Ireland in Adana on Friday.

Turkey's national football team hosts Northern Ireland for an internationally friendly in preparation for the Euro 2016 qualifiers. Straight off from a disappointing campaign for World Cup qualification by being eliminated by fellow group rivals the Netherlands, Romania and Hungary, Coach Fatih Terim is bringing on a newly named squad with a number of young arrivals. The match will be played at the Adana 5 Ocak Stadium and kicks off at 9 pm with Kanal D broadcasting the game live. Holland Football Federation referee Bas Nijhuis will be overseeing the match. His assistants will be Rob van de Ven and Charles Schaap, while the fourth official will be Dennis Higler.

Turkey has faced off against their Northern Ireland rivals a total of 11 times in the past, four of which have ended in victories and five which went to tonight's visitors. Two matches ended in a draw. Our national players will play their second preparation match for Euro 2016 on Tuesday, November 19 against Belarus in Mersin.

Coach Fatih Terim has invited 13 new players to the squad, for which nine this will be their first time playing on the national team. With the exception of a select few, the majority of the new players are young, with an age average at 23, however their statistics have placed them at the top of the Super League for titles including 'longest runner', 'best pass stealer" and "most accurate passer".

For Koray Altınay, Tarık Çamdal, Aytaç Kara, Salih Uçan, Uğur Çiftçi, İshak Doğan, Adem Büyük, Aydın Karabulut and Zeki Ayvaz, this is the first time they have been called on by Fatih Terim to take part in the National Team. Although Serdar Aziz, Serkan Kırıntılı and Aykut Demir have been called to the team in the past, they have yet to have an opportunity to don the team's uniform on the field.

For Coach Fatih Terim tonight's game will be a homecoming of sorts as the local hero not only hails from Adana, he also started his football career with Adana Demirspor.