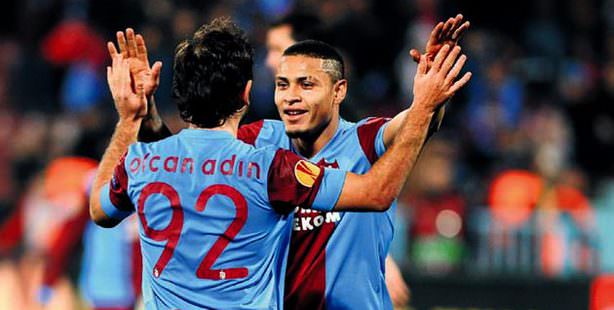 Trabzonspor signed on to another significant win on Thursday scoring 4-2 against UEFA Europa Cup rivals Apollon Limassol and securing their spot in the top of Group J. Player Olcan Adın went down in history for scoring host Trabzonspor’s first-ever hat-trick in Europe. If Trabzonspor beats Lazio in their final foray to qualify for the last 32-knockout phase, they will also become the Turkish team to advance from a group stage-qualifying round with the highest point standings.

Trabzonspor continued their successful campaign in Group J of the UEFA Europa League on Thursday night at home with a 4-2 win against Greek Cypriot team Apollon Limassol at Avni Aker Stadium. Not only has Trabzonspor secured a spot in the final 32 knockout round, but also should they beat their final Group J rivals Lazio on December 12, the Black Sea reps will also become the Turkish team to have the highest standings in advancing from a European league group-qualifying round.

Trabzonspor's Olcan Adın also made history on Thursday by becoming the team's first player to score a hat-trick in a European league. Leading the scoring in the 23rd minute with a header, two minutes later Olcan also assisted the team's second goal scored by Soner Aydoğan in the 25th minute. Olcan returned to score a goal in the 61st minute just as fans were getting ready to perform their traditional cheer at the 61-minute mark inspired by the province's identifying license plate number. Soon after, the Greek Cypriots had a comeback as Apollon took the stage scoring in the 68th minute with Abraham Gue Gue and in the 80th minute with a penalty shot by Gaston Sangoy. Olcan Adın sealed the deal, as well as his own historical hat-trick in the 83rd minute bringing the final score up to 4-2.

Trabzonspor's point standings rose to 13 as the team maintained their spot in the top position in Group J. Italian contenders Lazio trail in second place with 11 points, while Apollon is in third with four points and Poles Legia Warszawa trail in fourth place with zero points. Trabzonspor has not lost a single game of the total 11 played in Europe this season and hopes to continue this trend when they face off against Lazio at the Stadio Olimpico in Rome on December 12 as well as to take home the title of becoming the Turkish team to have the highest point standings in a group-stage qualifying round in a European league.