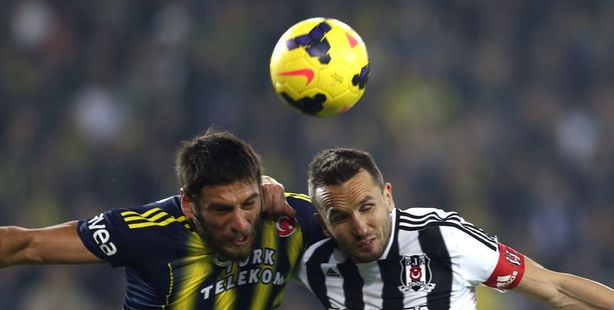 Fenerbahçe hosted archrivals Beşiktaş for a historical derby on Saturday, which ended in a 3-3 draw and two players being sent off the field with red cards. On Sunday, reigning champions Galatasaray failed to take advantage of Saturday’s draw against the league’s second top team Kasımpaşa in a game that ended 1-1.

After an explosive weekend of face-offs between top four teams leading the Spor Toto Super League, the standings remain the same with the exception of each team having garnered a single point for drawing in the two high-stakes matches played over the weekend.

On Saturday, league leaders Fenerbahçe hosted archrivals and third in the standings Beşiktaş for a high-energy derby that ended in a 3-3 draw. Beşiktaş fought well in front of the 52,000 Fenerbahçe fans that filled Kadıköy's Şükrü Saracoğlu Stadium by starting off the scoring and maintaining a lead for a significant portion of the game. However, a late goal by Fenerbahçe reaffirmed their position at the top of the league standings by a six-point lead over second place Kasımpaşa.

Beşiktaş started out the scoring with an early goal by Olcay Şahan in just the 9th minute, however just three minutes later, Emmanuel Emenike equalized the score. In the 30th minute, Fenerbahçe lost a player as Raul Meireles was sent off the pitch with a red card. In the 37th minute Moussa Sow secured Fenerbahçe the lead, however in the 43rd and 45th minutes, Beşiktaş's Hugo Almeida scored two consecutive goals that brought the visitors up by 3-2 going into half-time.

Beşiktaş's Necip Uysal was sent off in the 69th minute for a red card and in the 87th minute Alper Potuk scored for the hosts bringing the final score to a 3-3 draw in a game that saw two red cards and six yellow cards distributed evenly to both teams.

On Sunday, reigning champions Galatasaray, who currently stand in fourth place behind Beşiktaş in the league, failed to capitalize on the 3-3 draw between their historically toughest rivals, in a challenging away game against Kasımpaşa. Fellow Istanbul team Kasımpaşa, who currently trail Fenerbahçe in second place in league standings, opened the scoring in the 11th minute with a goal by Syrian midfielder Malki Sanharib. In the 60th minute, Galatasaray leveled out the score with some fancy passing by Dider Drogba that created an easy position for Burak Yılmaz to shoot the game's final goal.

After this weekend's battle-out between the top four leading teams in the league, the positioning remains the same as Fenerbahçe is the far-away leader in first place with 32 points. Kasımpaşa follows with 26 points and Beşiktaş is in third place with 25 points. Galatasaray is in fourth with 23 points after this weekend.