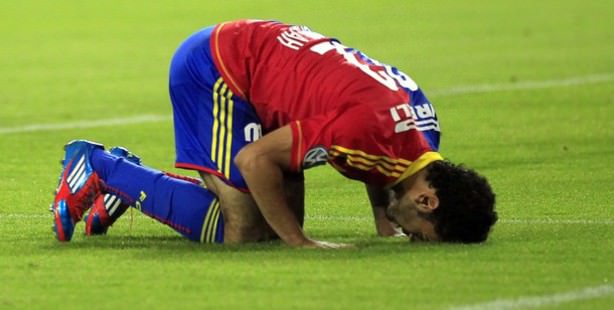 Egyptian National Mohamed Salah is a player known to make just as many headlines with his outspoken political views as he does with his outstanding shows of skill and ability on the field.

At a still ripe age of just 21, Mohamed Salah has seen a lucrative career totaling 88 starts for two clubs in just three years. Perhaps more astounding is his forum for his country, where his passionate personality translated into a display of 17 goals in just 27 starts, national figures better than that of many full-fledged seasoned strikers. Despite still being at an age where he is still developing as a player he managed to start this January transfer period's greatest competition, as both English Premier League giants, Liverpool and Chelsea were openly courting the player.

In his 47 appearances for Basel Mohamed Salah scored 9 goals. One of the nine he scored in the away game at Tel-Aviv for UEFA Champions League Group Stage qualifications. The game known more now for Salah's comments, politically controversial in European standards, without a doubt the most memorable.

After a victory in the home game in Switzerland, Mohamed Salah had asked the club administration if he could be exempt from playing the return match in Israel. The club administration refused his request and when the news leaked to the public, European news outlets took what would normally be a small issue and turned it into a sensation. As he was getting criticized left and right, Mohamed Salah in the end had the final say, as he said to an Israeli reporter that contacted him;
"I will fly to Israel. Football is more important than politics and it is my job. In my thoughts I will be playing in Palestine and not Israel. I will score and win there. The Zionist flag will not be shown in the Champions League."

During the pregame handshakes, Salah also further raised the pressure placed upon himself as he was further criticized for not sticking the conventional handshake, instead opting to fist bump opponent players.

If he wanted to prove a point and emerge victorious from this battle, he had to make good of his words, and he did just that. Though the final score on the boards read 3-3, the previous win in Switzerland, and the advantage of away goals Basel defeated their opponents, and the Egyptian dynamo had his victory and his goal.

After shining in the Basel squad in the past season and in the first half of this one, Mohamed Salah attracted the attention of big clubs all over the continent, spear heading the efforts to sign the 21 year old were English rivals Chelsea and Liverpool. Not surprisingly, Liverpool lost out, as the Russian Billionaire backed London club won the race.

But what is surprising is that Roman Abramovich, an open supporter and often times generous sponsor of the Israeli state and a subscriber to the Jewish faith, decided to purchase this player. What is left to be seen is how the two will interact. Will the two be able to set aside their polarized political views and retain a professional relationship? Will Salah be able to perform in a club where the dictatorial president often times seems to overly influence club managerial decisions? Will Salah become one of the many who in the past signed onto the London club with hopes of staring in their success but end up rarely stepping foot off the bench? These questions will be answered in time, as future developments in Salah's career promise if anything to be entertaining.