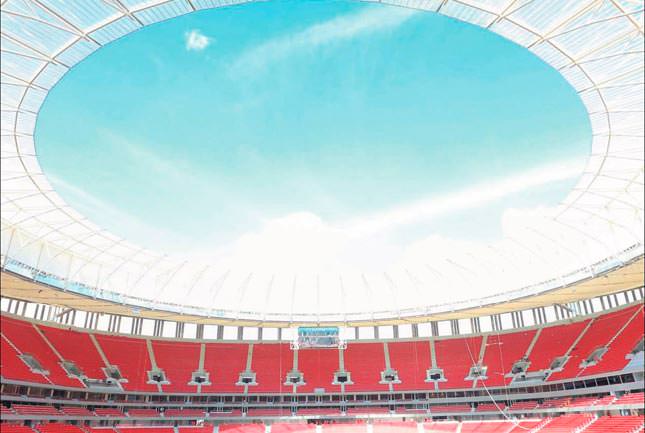 As Brazil's iconic city readies itself for the FIFA World Cup and the 2016 Summer Olympics, many residents have been forced to leave their homes

With her family of six living in five different houses scattered across the city, Dalvaneide Pequeno do Nascimento longs for the days when her whole clan shared the same roof.

Nascimento, her husband and children were among the more than 230 families forced out of their homes in Vila Recreio II, a Rio de Janeiro slum that was razed three years ago to make way for the Transoeste expressway connecting the Barra da Tijuca neighborhood that will be the main hub for the 2016 Olympics with the western outskirts of Rio.

It's just one of a slew of urban renewal efforts launched ahead of this year's World Cup and the 2016 Olympics, works igniting a sweeping transformation of Rio after decades of neglect since Brazil's capital was moved to Brasilia in 1960. Officials are using the events as catalysts for expanded metro lines, roads, airport renovations and other works.

Critics say poor residents such as Nascimento are paying the price and estimate some 100,000 people have been evicted or face removals to make way for the projects. "The city has become the object of the big business, the big interests behind the mega-events," said Marcelo Chalreo, who heads the human rights commission of the Rio chapter of Brazil's bar association. "In the name of the (sporting) events, now everything has to be pretty and nice looking."

Nascimento said city officials presented her and her husband, bricklayer Jucelio de Souza, with a simple choice: Accept a lump-sum compensation for their house, be given an apartment in a distant housing project or walk away with nothing.

With Rio's real estate market among the hottest in the Americas and even homes in many slums fetching upward of $50,000, the city's compensation offer of just over $2,300 was grossly inadequate, Nascimento said.

Scared of being left homeless, the couple chose the apartment and were assigned a unit in a housing project in the distant suburb of Campo Grande. Inaugurated in 2011, the Condominio Oiti project, a grouping of beige four-story towers that now houses nearly 200 families originally hailing from slums throughout the city, is 35 miles (60 kilometers) from Rio de Janeiro's center, and prohibitively far from the upscale home where she works as a nanny.

"It's a nightmare," said Nascimento, whose weathered, lined face belies her 36 years, 16 of them spent in the Vila Recreio II slum. "There's nothing here, no work, no hospitals, no public transport, nothing. They forced us out of our houses and dropped us here in the middle of nowhere."

City officials have in the past acknowledged that some 15,000 families were resettled, but insist the moves were done to remove people from areas prone to deadly mudslides and had nothing do with the World Cup or Olympics.

The office of Rio Mayor Eduardo Paes confirmed that in a statement, saying it "is not and will not carry out any resettlements" connected to the World Cup.

For coming Olympics preparations, however, city officials said they planned to resettle 278 families living on land that's part of the Olympic Village. Local organizers for the World Cup didn not respond to requests for comment, while Olympic organizers confirmed the removals near the Olympic village.

Amnesty International Brazil paints a different picture, saying 19,200 families in and round Rio have been pushed out of their homes since 2009. An advocacy group for affected slum residents called the Popular Committee for the World Cup and Olympics estimates that 100,000 have or will be moved.

Evictions and the Olympics have long gone hand-inhand, and even the worst-case scenario for Rio involves far less than the one million believed to have been moved for the Beijing Olympics in 2008 or what some rights groups estimate were the 720,000 people displaced ahead of the 1988 Summer Games in Seoul, South Korea.

Officials have said all removals in Rio have been carried out fairly, with those evicted being offered a wide range of housing options. Advocacy groups and those who have lost their homes, however, tell a different story. "The city's removal policy is disastrous because it's taking these pockets of poverty and pushing them out to the furthest limits of the city, thus making vulnerable people that much vulnerable," said Renato Cosentino, a member of the Popular Committee.

For Nascimento's husband Souza, in fact, the family's eviction has put more obstacles in the way of an already difficult life. The distance that separates their new home from the jobs, schools and hospitals of central Rio has wrenched the family apart. Since their 2011 move, Nascimento sleeps five nights a week at her employers' house. Otherwise, her commute would gobble up at least six hours a day, its cost taking a major bite out of her $500 monthly salary. For similar reasons, her husband shells out $190 a month for a tiny rental apartment close to his job.

One of Nascimento's youngest children lives with her mother and another with a close friend, while her two teenage boys live alone in the housing project. "We were working hard and getting ahead in life and then this happens and it sets us not even back to where we started, but way back before the starting point," said Souza, his sunglasses failing to conceal the tears streaming down his face. "I would give everything just to have my little plot of land back and my family whole again."