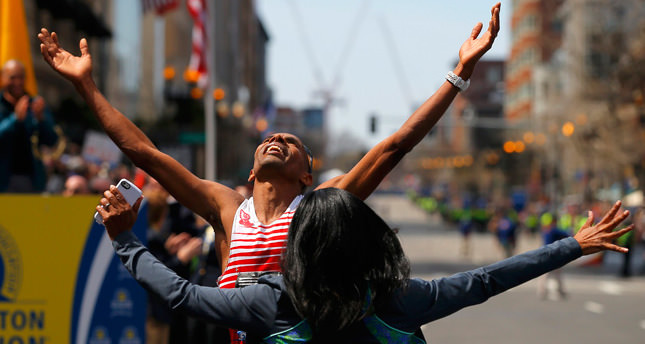 by AA
Apr 22, 2014 12:00 am
BOSTON — One year after a deadly bombing attack left three dead and injured hundreds, people from across the globe flocked to Boston's streets Monday to compete and cheer on family and friends in the city's annual marathon.

Nearly 36,000 competitors, the second highest in the race's history, took to the 26.2-mile (42.1 kilometer) course to test their endurance and show their support for a city that has defiantly rallied around a motto of "Boston Strong".

Security was at a fever pitch Monday with helicopters hovering overhead and bomb-sniffing dogs patrolling streets. Over 100 cameras monitored the marathon route and about 50 observation points were set up around the finish line, the target of last year's bombings.

Meb Keflezighi, an Olympic medalist, won the men's title Monday with a time of 2:08.37. He is the first American man to stand atop the podium since Greg A. Meyer in 1983. Keflezighi beat out strong international competition from Lelisa Desisa, an Ethiopian long-distance runner who won last year's race, and Wilson Chebet of Kenya.

Rita Jeptoo, a Kenyan, successfully defended her women's title while setting a course record of 2:18.57.

This year's race began with a solemn moment of silence for those killed and injured in 2013.

Two Chechen brothers, Dzhokhar Tsarnaev and his elder brother Tamerlan, have been accused of leaving backpacks with pressure-cooker bombs near the end of the marathon route.

Among the three dead were an eight year-old boy. Some 260 were injured.

Tamerlan Tsarnaev was later killed during a shootout with police in the Boston suburb of Watertown following a citywide manhunt.

The younger Tsarnaev was taken into police custody after he was found hiding in a stored boat. He has pleaded not guilty to 30 charges related to last year's attack. His trial is set for November this year.