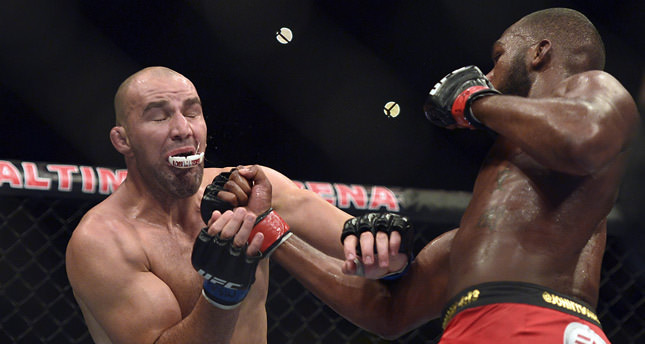 Jones (20-1) won 50-45 on all three scorecards and rolled to his 11th straight victory, the longest streak among active UFC fighters.

Jones had the Baltimore crowd roaring when he opened his pre-fight walk with the "squirrel" dance Ray Lewis made famous. The former Baltimore Ravens linebacker had a cageside seat and stood several times to cheer for Jones. Chandler Jones and Arthur Jones, his NFL-playing brothers, also attended. Arthur Jones, who plays for the Colts, was a Super Bowl champion with Lewis and the Ravens.

Jones was warned twice about eye pokes in the first two rounds and was threatened to have a point deducted if he did it again. No need.

He battered and bloodied the challenger, opening a cut over Teixeira's right eye, and sending his mouthpiece flying with a hard right. Jones took down Teixeira in the final seconds of the fourth and pounded away on his face before the horn sounded.

He was in complete control in his latest dominant performance, something he vowed to do after he took a pounding the last time out against Alexander Gustafsson. Jones, one of UFC's biggest active pay-per-view draws, pinned Teixeira against the cage several times and wore him down with body shots.

In the co-main event, Anthony "Rumble" Johnson cruised to a unanimous decision victory over former Penn State wrestler Phil Davis. Johnson fought for UFC for the first time in more than two years after he was cut once before for repeatedly failing to make weight. UFC President Dana White welcomed Johnson back with one caveat, he would never return if he failed to make weight for the Davis bout.

Johnson made weight for the 205-pound bout and made Davis pay. He busted open Davis near his left eye with a flurry of strikes early in the first, stopped all eight takedown attempts over three rounds and won 30-27 on all three cards.

Looking at White, Johnson expressed gratitude for his second chance.

Earlier on the pay-per-view card, Max Halloway choked out Andre Fili in the third round and Jim Miller did the same against Yancy Medeiros in the first round. Luke Rockhold tapped out Tim Boetsch also in the first to keep UFC 172 humming along.

"It's the night of guillotines, I guess," Miller said.

With UFC bantamweight champion Ronda Rousey in her corner, Jessamyn Duke dropped a unanimous decision to Bethe Correia in the only women's bout. Rousey, perhaps UFC's biggest star, accompanied Duke to the octagon and shook her head in disgust after the scores were announced.

"I thought I had it," Duke said. "I knew it was going to be close, but I really thought the fight was mine."

Chris Beal opened the card with a flying right knee that connected flush on Patrick Williams' chin for a KO.