Base jumpers fret as French daredevils look to urban sites 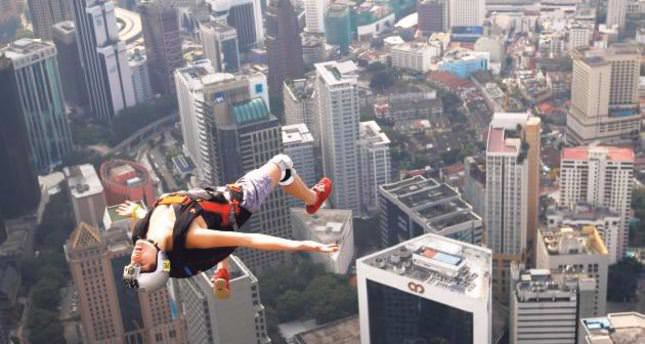 by Apr 30, 2014 12:00 am
PARIS — Just before midnight, a man climbs onto a ledge on the 21st floor of a building in southwest Paris and leaps off. Seconds later he opens his parachute - all part of the thrill of base jumping. Unlike sky divers who leap from an aircraft, base jumpers take off from a fixed point, usually a cliff or a bridge. But daredevils in Paris, like their counterparts in other cities, have taken the sport to high spots including the Eiffel Tower, Montparnasse Tower and skyscrapers in the business district La Defense - even though such stunts are strictly illegal in urban settings. "The city at night is splendid. To be perched on a building without anyone's knowledge, while knowing that one is going to throw oneself off, and see a series of windows, that's even better!" said David Laffargue, who has a jump off a 47-floor La Defense building to his name. "Just watch Batman to get an idea of the visuals when one is falling," he exclaimed. Any site above 60 meters is a potential jumping- off point, said a base jumper who gave his name only as Rodolphe and who has logged 1,200 urban and natural jumps for a total of about 15 hours spent in the air.

He noted however that "it should not be windy and the road below should be clear of objects like lamp posts and so on." Laffargue said such obstacles make urban jumps all the more special. "From a technical point of view, such jumps are very demanding - they are low jumps, the landing zones are small and dotted with obstacles like streetlamps, power lines and cars, and buildings make air currents unstable," he said.

From a psychological point of view, there is also more stress than in non-urban jumps, not least because urban base jumping is illegal. "Because it is illegal you have to do it quickly," Laffargue said, adding, "A base jump of any kind requires thorough preparations, but an urban jump requires preparations down to the millimeter."

A base jump is defined as a leap off a fixed high point - the name being an acronym for Building, Antenna, Span (such as bridges) and Earth (natural settings). But such stunts are banned in most cities for public safety reasons, and regulators have clamped down even at some natural sites such as at nature reserves in the U.S. Videos on YouTube document these city feats, which usually happen after nightfall, with the jumpers fleeing upon touching down to avoid being caught by police.

A woman who witnessed the jump in southwest Paris said, "There were three of them. Once they reached the ground, they folded their parachutes very quickly, climbed into a car and drove off rapidly." Three men were arrested following a base jump last September from the top of the nearly completed One World Trade Center and charged with reckless endangerment. On the other hand, just last week authorities in Dubai condoned a record-breaking jump off a special platform atop the 2,717-meter Burj Khalifa, the world's tallest building, by Frenchmen Fred Fugen and Vince Reffet.

Yet it is not only law enforcers who are exasperated by such stunts in the city; others in the base jumping community are also opposed, complaining that they give a bad name to the sport and fuel the stereotype of irresponsible thrill seekers. Even in a natural setting, base jumping carries high risks. In Switzerland's Lauterbrunnen village, which is a magnet for base jumpers because of its enormous rock walls, five people were killed last year alone practicing the sport.

Some plunge to their deaths as parachutes fail to open, others slam against the rock walls or land awkwardly on trees.

A Norwegian study published in 2007 concluded that base jumping is between five and eight times more likely that skydiving to result in injury or death. But nothing attracts the spotlight like a fatal jump off a tourist attraction in a major city. In 2005, a 31-year-old Norwegian fell to his death in a base jump from the Eiffel Tower. "It's not the image that we want to give to our sport," said Roch Malnuit, who heads the French Base Jump Association. "Those who jump in town do it mostly because they live there. But I can assure you that 90 percent of the jumpers prefer cliffs," he said.

Some are so exasperated they have coined the word "paralpinism" to refer to base jumping that is practiced only in natural settings. Jean-Philippe Gady, who heads the Paralpinism Association, complained, "Some people just jump so they can get it on a video on YouTube." Others like alpinist Erich Beaud, one of France's pioneering base jumpers, say new technologies like hands-free GoPro cameras that athletes can use to film their exploits encourage greater risk-taking. "Today, many people who know nothing want to buy equipment. But when some make a mess of things, it penalizes the entire community," Malnuit said. Others simply feel it is more enjoyable to jump without the stress of having to evade arrest. Swiss athlete Geraldine Fasnacht said, "I have jumped illegally from a building but frankly, I hated the stress of doing that. I prefer to glide in the mountains from beautiful cliffs, without any fear of ridiculous reprisals from police for enjoying myself."