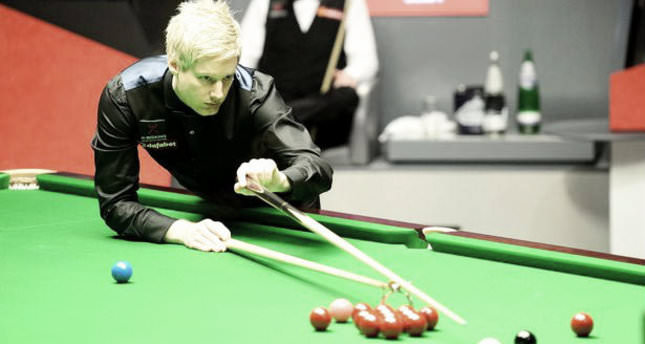 by Anadolu Agency May 02, 2014 12:00 am
SHEFFIELD, U.K. — World number one Neil Robertson's semi-final was squarely in the balance after the first session of his World Championship semi-final.

Ronnie O'Sullivan opened up a 6-2 lead over Barry Hawkins and Mark Selby was on course to do likewise against an out-of-sorts Robertson, only for the world number one to add to his historic century of centuries and close to 5-3.

The evening's action saw Selby take the opening frame with 65 and he should have added the second after Robertson missed a straight pink.

Selby made 54, including a lovely shot from a pink to develop a red near the middle pocket but missed a relatively simple frame-ball red down the top cushion and had to watch a Robertson clearance featuring excellent pots on the yellow and green.

Robertson went 2-1 ahead after a messy end to frame three but there was no such struggle in the next, as Selby played a good shot to open the pink and converted it into a 133 break to deservedly level.

Robertson came from 5-1 down to beat Selby 10-7 in December's UK Championship final but does not feel the memory of that result will affect the Leicester cueman.