Swimming across the continents 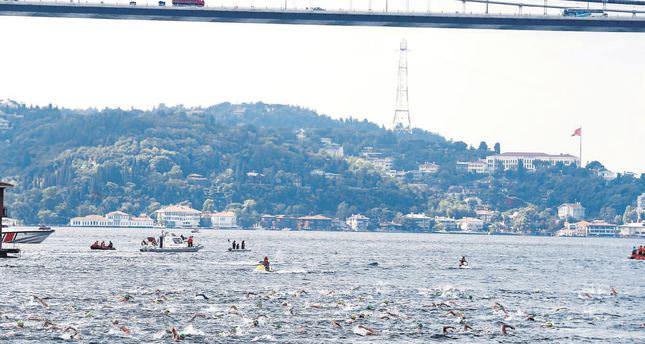 The traditional 26th Samsung Bosporus Cross Continental Swimming Race saw 1729 sportsman from 45 countries compete against one another to see who could complete a swimming course across the Bosporus the fastest yesterday morning. Hundreds of swimmers began the race from one of the most famous locations along the Bosporus in Kanlıca and started swimming toward Kuruçeşme on Istanbul's European side. The course in total stretched 6.5 kilometers.

The Bosphorus was far from tranquil yesterday but despite the conditions families came to the Kuruçeşme Park to view the competition, where banners were hung and applauses and cheers reached from Asia to Europe. In the end, Turkish swimmer Hasan Emre Musluoğlu broke the record, winning the race for a fifth consecutive time.

He finished the 6.5 kilometer course in 41 minutes 26 seconds. Fellow Turkish swimmer Bertuğ Coşkun came second with 42 minutes 58 seconds, followed by Russian swimmer Egor Savchenko with 41 minutes 34 seconds. In the women's category, Julie Upmeyer from the U.S. won the title and put up a time of 49 minutes 11 seconds.

This year, the swimmers had a high-profile guest to cheer them on. Former Dutch swimming great, Inge De Bruijn came to Istanbul to promote the event, following in the footsteps of swimming legends Mark Spitz and Ian Thorpe who attended in past years. The winners received their awards from de Bruijn and Turkish Olympic Committee President Uğur Erdener. Pippa Middleton, the younger sister of Kate Middleton, Duchess of Cambridge also attended the race.

For 26 years, thousands of athletes from around the world and Turkey have been meeting in Istanbul to challenge one another and discover their limits. The Samsung Bosphorus Cross-continental Swimming Race is organized under the auspices of the International Olympic Committee and is supported by contributions from numerous corporate and private sponsors. Thanks to increased interest each year, this event, which began with just four female and 64 male athletes in 1989, has grown to become an important part of the Turkish sports tradition.

With its national and international brand value, the Samsung Bosphorus Cross-continental Swimming Race is an event that brings together people who are devoted to swimming. Together with the number of athletes that increase each year, public interest in the event is growing.

This year the race hosted both swimmers and rowers. Single oar (1x) and double oars (2x) competed alongside swimmers. Competitors were divided into seven different categories according to age range. The Bosphorus was closed to ship and tanker traffic for the race.
Last Update: Jul 21, 2014 12:06 pm
RELATED TOPICS