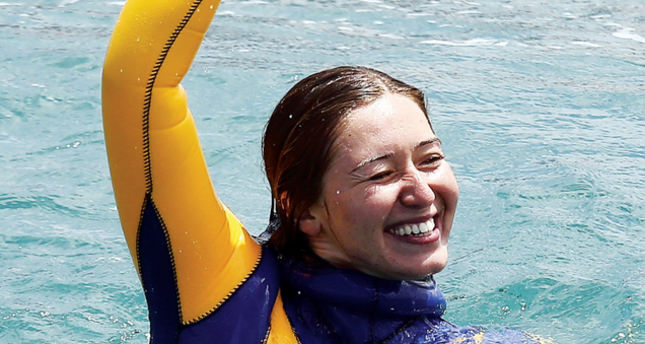 by Daily Sabah Jul 24, 2014 12:00 am
Turkish athlete Şahika Ercümen broke the world record in variable-weight free-diving by reaching a depth of 91 meters. Ercümen, who is currently a member of the Middle East Technical University Underwater Sports Club, made her record trial on the offshore coast of Kaş in Antalya province without the aid of an oxygen tank and flippers. Previously, Derya Can set the record by diving to 90.2 meters.

"The record trial was rather easy for me and I am very happy. I would like to dedicate my success to the Gaza victims. I held my breath for them," she said. Ercümen also drew attention to the Mediterranean folks under the risk of extinction. She will make another record try in Çanakkale for the martyrs who lost their lives in the battle of Gallipoli. Ercümen later dived in 22 meters without oxygen tanks with disabled athlete Ufuk Koçak. "It was an honor to dive with a record holder. Being a disabled athlete cannot restrict me from diving," he told. Ercümen was born in Çanakkale on Jan. 16, 1985. She is known as one of the most successful free-divers and underwater hockey players.

In 2006, she shattered the Turkish record at the Free Diving World Championship held in Tenerife, Spain. Later, she set another Turkish record at the National Dynamic Apnea [a category of free-diving] Championship that took place in the Middle Technical University Pool between May 26 and May 27 in 2007. She reached 143.5 meters with a single breath. Ercümen ranked third in Europe with the Turkish Underwater Hockey National Team in 2008. She also ranked fourth at the Free-Diving European Championship despite having injuries. In 2009, she was the free-diving champion of Turkey. Ercümen achieved another Turkish record in 2010, which was very close to this year's free-diving world record.
Last Update: Jul 24, 2014 6:03 pm
RELATED TOPICS