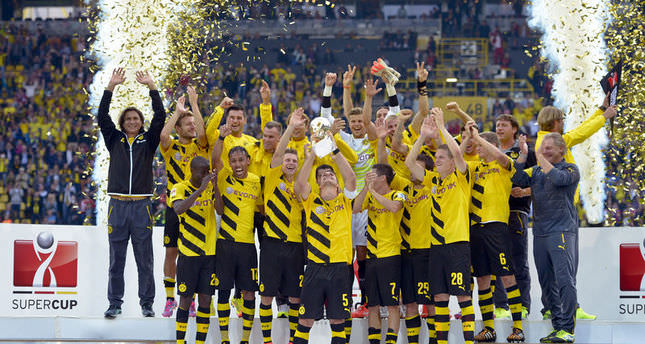 by Aug 13, 2014 12:00 am
Borussia Dortmund eased past lacklustre Bayern Munich 2-0 with goals from Henrikh Mkhitaryan and Pierre-Emerick Aubameyang to lift the German Super Cup on Wednesday and draw first blood in their rivalry with the Bavarians this season.

With both clubs leaving most of their World Cup winners and big names at home or on the bench, all eyes were on Bayern's new striker Robert Lewandowski.

With Dortmund fans whistling and jeering the club's former forward on his first return to the city since joining their rivals, Armenian Mkhitaryan struck in the 23rd minute, rifling home after a superb passing move.

Bayern, without Franck Ribery and Arjen Robben as well as defender Rafinha among others, were on the back foot for much of the game with keeper Manuel Neuer repeatedly coming to the rescue.

He was without a chance, however, when winger Aubameyang rose high above defender Jerome Boateng to drill in a header in the 62nd minute and celebrate by putting on a Spiderman mask he slipped out of his sock to the delight of the 80,600 crowd.

Dortmund had chances to add to their tally en route to retaining the trophy, with last season's double winners Bayern, who also lost the Super Cup 12 months ago, looking more like a work in progress with the league start just over a week away.