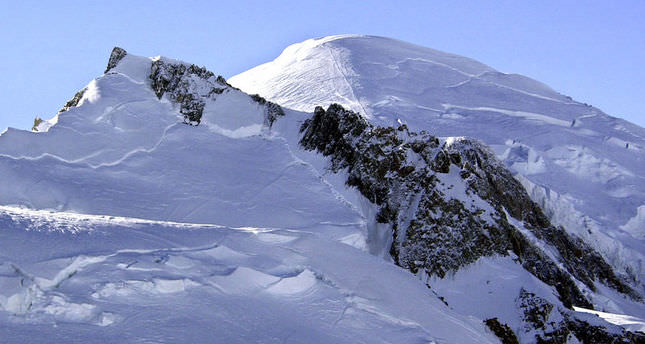 by Aug 18, 2014 12:00 am
Two climbers and their guide have fallen 800 metres to their death in the Mont Blanc range, police said on Monday, the latest in a series of tragedies on Europe's highest mountain.

"The fall of 800 metres (2,600 feet) gave them no chance," police said, adding they probably fell off a ridge that climbers must take to return to a nearby refuge hut.

"Investigations are ongoing to find out the cause of the fall. It's possible that an overhang of snow gave way under the group, preventing the guide from holding up his clients," police added.

Helicopter rescue teams discovered the bodies of the three victims on Sunday night near the Aiguille du Midi peak, which rises to a height of 3,842 metres (12,605 feet).

Searches had been ongoing since Saturday evening.

The deaths came just days after six climbers fell 250 metres to their death on another peak, the Aiguille d'Argentiere, and brings to 20 the number of deaths or missing since the beginning of the climbing season.

That accident was the single worst loss of life on the mountain in more than two years.

In addition, two Belgians were found dead on August 2 and six climbers died between July 15 and 30 -- two Irish, two Finns, a German and a French person.

A US climber sparked outrage earlier this month when he tried to climb the mountain with his nine-year-old son and 11-year-old daughter and got caught in an avalanche.

The family escaped uninjured, but video footage of the incident in a spot known as the "Corridor of Death" caused an outcry when it was broadcast in the United States last month.

That incident sparked fears that the mountain was becoming a tourist "free for all."
Last Update: Aug 18, 2014 1:53 pm
RELATED TOPICS