Sultans of the Net disappoint against Japan 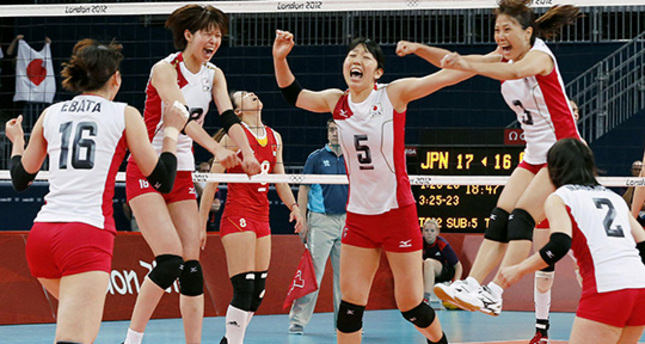 by Anadolu Agency Aug 22, 2014 12:00 am
Host country Japan won their second straight match in the FIVB World Grand Prix Finals, beating Turkey 3-0 (25-13, 25-17, 25) at the Ariake Coliseum in Tokyo yesterday. Japan overturned an early Turkish lead - helped by an ace by Haruka Miyashita - and were two points ahead at the first technical timeout, although neither side could find a good attacking rhythm in the early stages. Japan were let down by four wayward serves in the opening half of the set, but Turkey called a timeout at 10-14 after a typically crafty ace from captain Saori Kimura and a super block by Risa Shinnabe on Kübra Akman.

Turkey's Neriman Özsoy did manage to land a huge spike but Miyashita delivered another unreturnable serve to put Japan 16-11 up at the second TTO. Another big block - this time by Kana Ono on Özsoy - gave Japan a 19-12 lead and Turkey their second timeout. Two good shots by Yuki Ishii pushed the score on for Japan and two more by Ono extended their lead to 10 points at 23-13. Kimura made a great block on Güldeniz Önal Paşaoğlu for setpoint and a firm hit by Ishii put Japan 1-0 ahead. Sloppy play by Japan - including another missed serve and some poor reception - allowed Turkey to take a 3-0 lead in the second set but Japan started to defend brilliantly and clawed their way back with good work by Kimura and a fine block by setter Miyashita on Özsoy. Turkey replied through Gözde Sonsırma, while Naz Aydemir Akyol blocked Miyu Nagaoka to give the
Turkey a one-point advantage at the first TTO. Özsoy kept the Turkey ahead but Ishii and Ono made sure Japan stayed close behind.

A mammoth point with fantastic defending from both sides saw Japan creep ahead at 13-12 and after Nagaoka made it a two-point lead, Turkey coach Massimo Barbolini called a timeout. Japan added two more points to lead 16-12 at the second TTO and were helped by blocks from Nagaoka and Shinnabe. Setpoint came on a miracle recovery shot from a prone Ono and a netted serve by Sonsırma put Japan 2-0 up. Kimura and Nagaoka landed some big shots to help Japan to an 8-6 lead at the first TTO in the third set and Barbolini called a timeout with the score at 12-9. Two big thumps and a tipover by Nagaoka extended the lead to five points at 15-10 and a miss by Sonsırma put Japan six points up at the second TTO. However, Turkey had pulled off a thrilling full set upset win over Brazil on the opening day of the 2014 FIVB World Grand Prix Finals Wednesday afternoon. With the 25-18, 25-23, 21-25, 19-25, 15-12 victory, the Turkish women snapped an amazing 18-game winning streak of the defending event champions in the World Grand Prix. Gözde Sonsırma led Turkey with 23 points and Neriman Özsoy added 21 while Caixeta Tandara was the topscorer for Brazil, the top finishers from the preliminaries with nine straight wins.

Also yesterday Brazil recovered from their first-day loss to Turkey to beat China 3-0 (25-23, 25-20, 25-21) on the second day of the FIVB World Grand Prix Finals at Ariake Coliseum in Tokyo on Thursday. Brazil's coach and captain were pleased with their improved performance. Russia started the second day of the FIVB World Grand Prix Finals in Tokyo with a 3-0 (25-23, 25-16, 25-19) win over Belgium at Ariake Coliseum yesterday. After winning their Finals opener against Belgium, China will be facing Brazil, whom they have not beaten since June 2008, when they won in the FIVB Volleyball World Grand Prix. The Chinese squad will attempt to snap their 10-match losing streak against the nine-time winners in the second match. Prior to the clash, opening day losing teams Russia and Belgium will finally break into the win-column. Meanwhile, winning teams Japan and Turkey will play each other to gain a better standing in the Round Robin competition.
Last Update: Aug 22, 2014 2:14 am
RELATED TOPICS