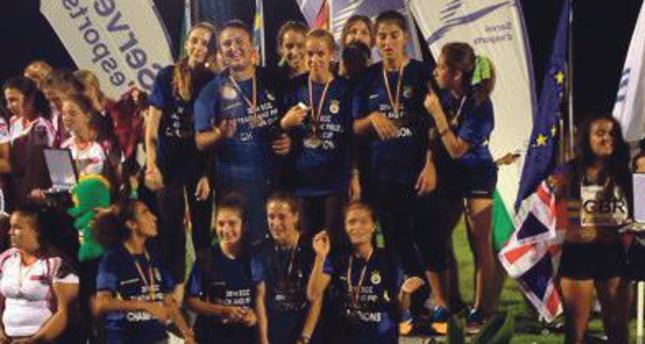 by Daily Sabah with Agencies Sep 22, 2014 12:00 am
Turkish giant Fenerbahçe's young athletes have achieved a phenomenal success in athleticism. They came in first, both in the men and women's categories at the European Champion Clubs Cup Track & Field Juniors Group A in Castellon, Spain. Fenerbahçe's Fatih Aktaş won two individual races and then led the spirit relay team home as Fenerbahçe won seven events on the way to repeating their success from Brno last year. It was some day for the squad and for Aktaş, who triumphed in the 100m and 200m before his relay exploits. Eight teams took part, with Fenerbahçe lifting the crown from the hosts with 124 points, Playas de Castellon (107), AD Mass Ljubljana (88), Shaftesbury Barnet Harriers (79), Sport Lisboa e Benfica (79), ASK Slavia Praha (77.5), Fiamme Gialle G.Simoni (64) and Tampereen Pyrinto (56). Fenerbahçe dominated, and though Shaftesbury begun in fine style as Fellan McGuigan won the opening event, the hammer, with a throw of 64.96m, after four morning disciplines, it was the Turkish side who were in the lead with 28 points followed by Lisboa with 19 and at 18, the three-way tie of Castellon, Fiamme and Praha. That came after two track wins for Fenerbahçe with Enis Ünsal taking the 400m hurdles in 53.62 seconds from Lisboa's Diogo Mestre in 54.44 seconds and Tampereen's Valtteri Toimela in 55.03 seconds. They achieved their second success as the same teams finished one and two with Aktaş winning the 100m in 10.75 seconds from Lisboa's Ricardo Pereira in 10.92 seconds and Ljubljana's Anze Sorn third in 11.09 seconds.

The 110m proved another event of maximum points for the Turks with Samir Akovalı winning in 14.43 seconds. Into the afternoon, after nine events, Fenerbahçe had established a 10-point lead with 54 from Castellon and Praha coming in third with 35. The Spanish hosts won the triple jump with Marcos Ruiz Perez's 15.57m jump while Ljubljana won the 800m as Jan Petrac triumphed with 1:50.63. But in the next race, the 400m, Fenerbahçe won their fourth event as Fahri Arsoy was first in 49.00 seconds from Ljubljana's Jakob Janez Vodeb in 49.02 seconds. Andre Pereira won the 3000m steeplechase for Lisboa in 9:20.52 with Ersin Tekal, of Fenerbahçe, second in 9:20.60 before the Turkish team had another success when Aktaş took the 200m in 21.46 seconds from Fiamme's Gabriele Gargano in 21.88 seconds.

With six events remaining, the outcome was almost guaranteed as Fenerbahçe led with 91 points, Castellon in seconds with 72 and Praha in third with 56. But Fenerbahçe still pushed on, with further wins from Şeyhmus Yiğitalp in the long jump with 7.18m from the second round and then in the final event, the 4x100m, as Ertan Özkan, Berk Köksal, Akovalı and Aktaş combined to triumph in 42.31 seconds as they beat Lisboa, second in 42.72 seconds, and Shaftesbury, third in 42.85 seconds. AK Olympic Brno made a fine start to the defense of their title as they moved into a six point lead after the opening four events, but Fenerbahçe, with European junior shot put champion Emil Dereli in their line-up, had too much in the end as they joined their men's team as champions. The Turkish side won with 113 points from Brno (109.5), Windsor, Slough Eton & Harrow (92.5), At Studentesca CA.RI.RI (83), Playas de Castellon (83), AD Mass Ljubljana (72), Tampereen Pyrinto (63) and BTV Aarau LA (62), who were relegated with 62. One of the key results was the last individual event – and Dereli was in a different class. She arrived with a record behind her, too, in a year where she added to her 2013 glory at the European Athletics Championships in Rieti by winning bronze at the World Junior Championships in Oregon. Here in Spain, she won with 16.19m with Brno's Patricia Slosarova in second with 12.37m. Brno took two of the first three events as pole vaulter Rebeka Silhanova's 3.90m was enough to beat Fenerbahçe's Demet Parlak with 3.80m, and teammate Pavla Kuklova took the hammer with her opening throw of 52.98m for a victory by five centimeters ahead of Deniz Yaylaci, who was second for the Turks with 52.98m. A final effort of 49.64m brought a Fenerbahçe victory to the javelin throw as Eda Tuğsuz threw 49.64m in the last round as she finished ahead of Ljubljana's Tina Vaupot with 43.87m.

With Michaela Dolezelova of Brno back in seventh in 33.67m, it meant the score at the top changed. Brno was now joined by Fenerbahçe with 32 points and with Castellon in third with 29, but then the Turkish side took command in a good afternoon session. Elif Özmen won the triple jump with 12.42m from Ljubljana's Eva Mustar with 12.36m and Monika Banovicova, of Brno, fourth with 12.07m. After nine events, Fenerbahçe led with 49 points over Brno with 45.5 and Castellon with 38. Yet, it was a competition that was far from over as Olivia Caesar, of Windsor, won the 400m in 57.48 seconds, Marcela Pirkova, of Brno, was third in 58.49 seconds, and Fenerbahçe's Hatice Ünzir fifth in 59.76 seconds.

Then in the discus, Paula Ferrandiz Torregrosa, of Castellon, was first with a best of 43.15m with Patricia Slosarova, of Brno, second with 41.56m and Fenerbahçe's Emine Girgin third with 38.66m. Now, Fenerbahçe's lead of 66 points was by only 2.5 from Brno with Windsor third at 51.5, but with Gülnaz Uskun then winning the 3000m steeplechase, by early evening with four events left and after a series of good finishes, that advantage for the Turkish women had stretched to 92 points to Brno with 81.5 and Studentesca with 70. It was not over, though. As Brno made a late challenge to keep hold of the title, Fenerbahçe's Nuran Satılmış finished a position ahead of Brno's Carmen Idris Beshirova in the 3000m – second in 10:34.28 from third in 10:47.03 – as Windsor's Eloise Davison won in 10:23.52. After Brno, which was second in the 4x100m at 47.71 seconds, Ljubljana won in 47.63 seconds, Fenerbahçe were back in seventh in 50.04 seconds and then as the tension mounted, Brno won the final event, the 4x400m in 3:56.61, with Fenerbahçe fifth in 4:02.70. But the Turkish side had done enough to triumph.