Turkey back on track with victory over Canada 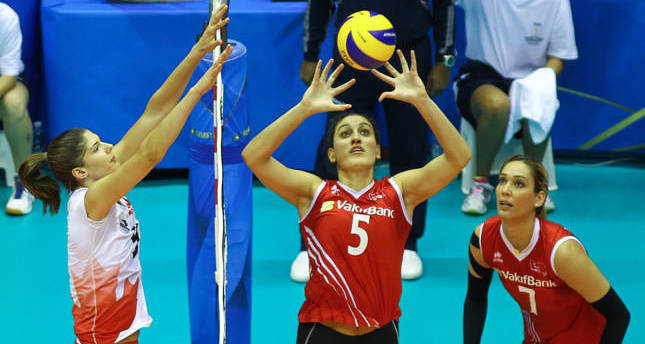 After losing a thrilling battle against Serbia, Turkey grabbed their first victory of the 2014 FIVB Women’s World Championship beating Canada 3-0 on the second day in Pool B

Turkey drubbed Canada 3-0 (25-10, 25-12, 25-17) yesterday in the 2014 FIVB Women's World Championship to give their bid for a qualifying position from Pool B a significant boost. Both teams are now on 1-1 records in the standings, giving Turkey plenty more to play for. This was the second World Championship meeting between Turkey and Canada. In the first round of the 2010 tournament, Turkey beat Canada 3-2 after trailing 2-0. Canada are winless in their last 15 world championship matches against European volleyball teams, since beating Finland 3-1 in the 1978 second group stage.

Turkish Neriman Özsoy topped the winner's scoring with 16 points followed by Seda Tokatlıoğlu with 15 points and Kübra Akman with 10 points. No Canadian player reached double digits. The top scorer for the North Americans was Lucille Charuk with nine points. The match was a tight affair to begin with before the Turkish team took the lead with Akman on fire. At the first technical timeout, Turkey led 8-6 before they increased their advantage progressively during the first set. The Canadians tried their best but were unable to build a well-organized defensive line. With fine passing and efficient blocking, Turkey increased their advantage to 18-8. Rebecca Pavan served an ace for Canada, but it was already too late. Turkey strolled through the first set 25-10 and looked on course to make up for Tuesday's disappointing loss against Serbia. Turkey remained focused from the beginning of the second set. Trailing 3-12, Canada tried a substitution with Brittney Page coming in for Richey Kyla. However, it was not enough to stop the Turkish team. Canada seemed to be overwhelmed by a Turkey performance brimming with physicality, speed and confidence. Very little was getting past libero Karadani, while the likes of Kübra Akman were firing kills to the court without any real resistance. Turkey wrapped up the second set 25-12. Canada had nothing to lose in the third set so were able to take more risks. The game remained tight at the start of the second period before Turkey opened a six-point gap at the second technical break. In the second part of the set, Canada fought back through Dana Cranston's power at the net but it was not enough to halt Turkey, who closed out the third set 25-17 to book their first victory in Trieste.

In the other matches yesterday, the U.S. completed a clean victory without dropping a set, 3-0 (25-20, 25-15, 25-22) over Kazakhstan in Verona. The Americans are at the top of Pool C with maximum points and are on track to confirm their ranking as the second-best in the world. For Kazakhstan, who are now at 0-2, things don't look quite so rosy.

China took advantage of two sets-worth of unforced opponent errors (61) to defeat Azerbaijan 3-0 (25-13, 25-16, 25-17) in Bari and retain a perfect record at the top of Pool D. Despite the heavy defeat and poor performance, Azerbaijan are hardly out of the picture, as they still have a 1-1 record.

The Dominican Republic scored their second victory in as many matches at these World Championships, thrashing Tunisia 3-0 (25-14, 25-19, 25-10) in Rome. The result still does not secure them a spot in the next round, especially as they dropped a point in their five-set win over Germany yesterday, but they are continuing in the right direction. Tunisia continues to struggle with an 0-2 record.