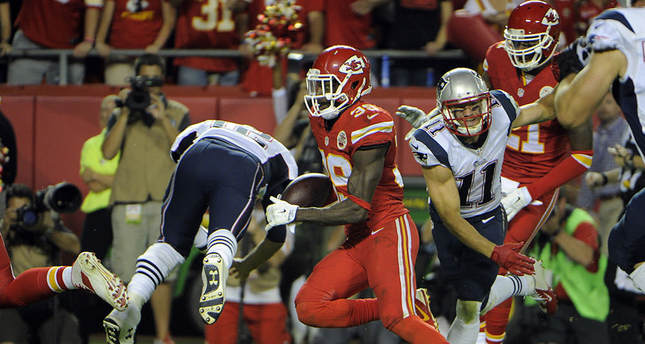 by Sep 30, 2014 12:00 am
Kansas City Chiefs player Husain Abdullah was slapped with a 15-yard penalty in Monday's NFL contest after punctuating a fourth quarter touchdown by dropping to his knees in prayer, the US media reported.

Abdullah, a devout Muslim, slid to his knees after intercepting a Tom Brady pass for a touchdown early in the fourth quarter of the Chiefs 41-14 win over the New England Patriots. He then leaned forward and pressed his forehead against the end zone grass.

It is technically a violation of the National Football League's "excessive celebration" rules after scores to do what Abdullah did. Whether the penalty was for sliding or the bowing in prayer is unclear.

"If I get a pick I am going to prostrate before God in the end zone," Abdullah told The Kansas City Star newspaper.

"For me, I just got a little too excited. I think it was for the slide."

Social media was quick to criticize the officials, including Abdullah's agent CJ LaBoy who indicated that his client was practising the 'sajda', a religious prayer.

"If the NFL tries to fine @HAbdullah39 for his TD celebration there's going to be some problems," LaBoy wrote on his Twitter account.

Chiefs coach Andy Reid didn't know what to make of the penalty.

"When you go to Mecca, you should be able to slide wherever you want," he said. "We've got two priests in here. They'd probably vouch for me."

Tebow, who attended Trinity Christian Academy, made no effort to hide his religious beliefs on the field, kneeling in prayer after scores and wearing religious messages in his eye black makeup.

Abdullah skipped the entire 2012 NFL season to take a pilgrimage to Mecca with his brother and fellow NFLer, Hamza.