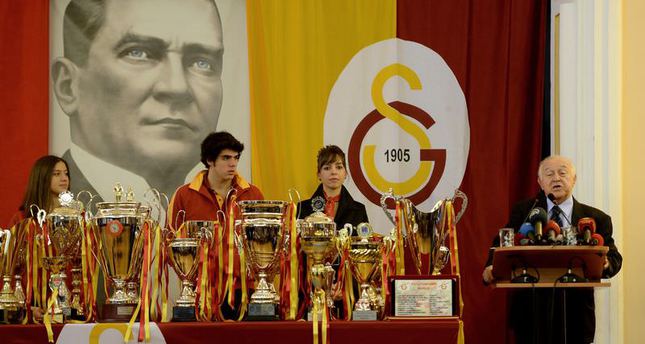 by Daily Sabah Oct 27, 2014 12:00 am
Turkish jurist and academic Duygun Yarsuvat was elected as the new chairman of the Galatasaray Sports Club on Saturday. The election was held in the club's extraordinary general assembly at Galatasaray High School, Istanbul. The 77-year-old Yarsuvat won the election with 1,777 votes, while candidate Alp Yalman received 1,566 votes. Turkish National Football Team coach Fatih Terim also casted his vote. Former chairman Ünal Aysal has been president for the past three years. When the official results were announced, Yarsuvat expressed his thanks. "As I always say, the election took place in a democratic atmosphere. There is no difference between each other, all of us support Galatasaray. If Alp Yaman won the election, I would give my support to him. Now, I have won and I am sure he will help me. We came here to show brotherhood and love because the roots of our team are based on these two principles," he said. Yarsuvat went on to say that Galatasaray consists of members with a humanistic character. "We are different from others not due to our high intellectual capacity, but our love and respect for humanity. I wish the best for Galatasaray," he continued. The new president still has the same views on Galatasaray's Italian coach Prandelli. "We will take into account the reports we have, but my decision is not in favor of Prandelli," he said. Yarsuvat announced that he will not run for president in next year's election scheduled in May.