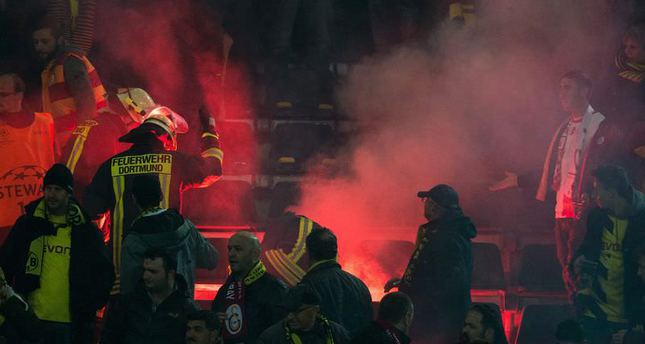 In Turkey, throwing firecrackers or smoke bombs onto the field of play is still a long way from being permanently prevented. But an investigation that has been opened in Germany may provide a lesson on how to deal with rowdy football fans. German police have launched an investigation into attempted manslaughter after Galatasaray fans threw firecrackers and smoke bombs onto the pitch and into the Borussia Dortmund spectators' section during the Turks' 4-1 defeat on Tuesday. German police arrested 21 Galatasaray fans and opened an investigation with potential charges including attempted manslaughter, breach of the peace and violations of the explosives act, according to local prosecutor Sandra Muecke. Edzard Freyhoff, Dortmund's police chief, said trouble had started in the city center before the Champions League game when a group of about 800 Galatasaray fans lit bangers and smoke bombs before marching toward the stadium. "Once the game started they continued lighting them. We identified some and arrested them on the spot," Freyhoff said. The Group D game was interrupted twice for a few minutes while the Turkish team's players went to their supporters in an effort to make them stop. In an earlier statement, Dortmund police said: "Among other investigations were those launched into attempted manslaughter, disturbing the peace, breaking laws regulating explosives and laws on assembly." Galatasaray's Selçuk İnan and Felipe Melo pleaded with fans to stop throwing fireworks during the match. Police checked around 700 fans at the end of the game inside the stadium, photographing them as well as their identity cards or passports so the information could help police identify more troublemakers, Freyhoff said. Two police officers sustained minor injuries. Galatasaray's Hamit Altıntop, who was born in nearby Gelsenkirchen, said, "I told them that if they continued like that the referee would stop the game."

Meanwhile, Galatasaray is facing UEFA sanctions for crowd trouble at a second Champions League match this season. UEFA said it charged the Turkish club for crowd disturbances, fans going on the pitch and throwing lit fireworks during a 4-1 loss at Borussia Dortmund. UEFA's disciplinary panel will judge the case on Nov. 13. Galatasaray fans could be barred from attending its final away group match at Anderlecht on Nov. 26. UEFA previously fined Galatasaray 50,000 euros for similar offenses at Arsenal last month. The club was also ordered to pay Arsenal for damage repairs. UEFA also charged Dortmund for disorder by its own fans and failing to prevent Tuesday's incidents. German police arrested 21 Galatasaray fans and opened a separate inquiry. Turkey's Youth and Sports Minister Akif Çağatay Kılıç said, "We don't know how UEFA will punish Galatasaray, but they definitely will be punished.